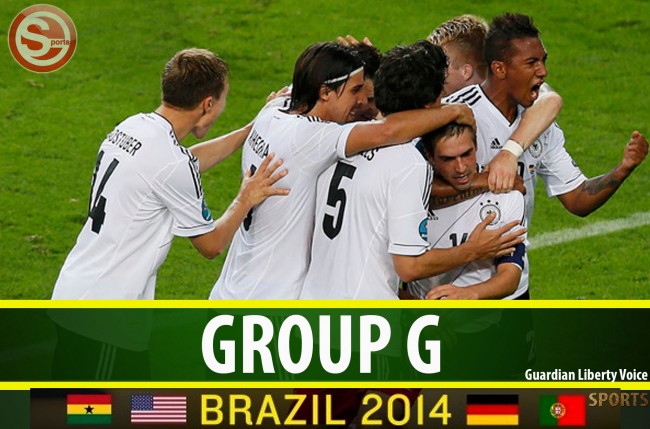 The top player that the soccer world will be watching when Group G of the FIFA World Cup begins play on Monday is Cristiano Ronaldo. Questions of the Portugal superstar’s health seem to rise and fall daily as the group gets closer to the start of play. There are, however, a number of other players fans will want to keep an eye on from the alleged group of death.

Germany’s Miroslav Klose appeared in his 132nd match for the national team on June 6. The game, which was Germany’s final friendly prior to heading to Brazil, was a 6-1 shellacking of Armenia. Klose became Germany’s all time leading scorer after netting his 69th goal in the friendly. Klose was born in Poland and lived in France until moving to Germany when the future soccer star was 8-years old. During the 2014 tournament, the now 36-year old has the chance to become the all-time top scorer in the World Cup. Klose is sitting at 14 goals and will have the opportunity to pass Brazil’s Ronaldo, who set the record with 15 goals over his career. It is expected that Klose will start in Germany’s first game against Portugal on Monday.

The Ghana National Team, known as the Black Stars, headed to Brazil after a 4-0 win over South Korea. In the game, Jordan Ayew unloaded with a hat trick and has the potential to be the most feared player on the team. When the Black Stars open up play against the United States on Monday, fans should take notice of Andre Ayew, not Jordan. Andre is the elder brother of Jordan and a veteran of the 2010 World Cup. The elder Ayew is anticipated to be a force for the Black Stars. Jordan and Andre are the sons of Abedi Ayew, who is considered to be one of the best soccer players ever to come out of Africa, and his son’s are keeping the family legacy alive.

The FIFA World Cup gives players that are not necessarily the top players on their respective national teams a chance to shine. Especially when there is an injury on the squads or top players retire. Injuries have plagued players of the Group G teams, and some players failed to be invited to try out for the team or were cut early on. This can be frustrating for fans who were anticipating watching their favorite players represent their nation only to find a team filled with a group of unknowns. This is what has happened to the United States Men’s National Team (USMNT).

USMNT head coach Jurgen Klinsmann is telling the media that the USA has no chance to hoist the World Cup at the end of the tournament and this is frustrating fans. Not inviting explosive scorer Eddie Johnson to camp and cutting the face of USA soccer, Landon Donovan from the team in favor of a younger squad has just added to the fans’ frustration. However, the US does have a chance to escape the group of death. While there are still some veterans on the team like Clint Dempsey and DaMarcus Beasley, who are likely to carry the squad, USA fans should take note of the 19-year old Julian Green. Klinsmann has high hopes for the youngster and was able to entice Green, who holds dual citizenship between the USA and Germany, to play for the United States. While Green has only a couple caps in friendlies leading up to Brazil, there is talent there and the potential to become the new face of USA soccer in the near future. The World Cup could be the coming out party for the young forward and American fans should watch closely.

Everyone will be watching Ronaldo for Portugal, questioning if a limp or lack of scoring is due to the star’s nagging injury to his left leg. The Portugal team needs Ronaldo to escape the group of death and have a chance at winning the World Cup. However, facing Germany to open up tournament play, defense is going to play a important role for Portugal and fans should keep a close eye on goalkeeper Rui Patricio. Patricio will have a huge responsibility during the tournament. If Ronaldo has to leave the game early, the keeper will need to step up big to keep the opponents from equalizing games or taking a lead. Expect the keeper to put on a show to keep Portugal’s chances alive.

There are a number of players on all the Group G teams that could come up huge for their respective teams. While top ranked Germany is looking to take home the cup for the first time since 1990 along with a scoring record by Klose and Portugal is wanting to prove that they are more than just Ronaldo, fans should not dismiss the lads from America or the Ghana squad. A spunky, young American squad and the Black Stars who have knocked the USA out of the last two FIFA World Cup’s, combined with Germany and Portugal show that the group of death is gearing up to be a series of games that the world will watch closely.