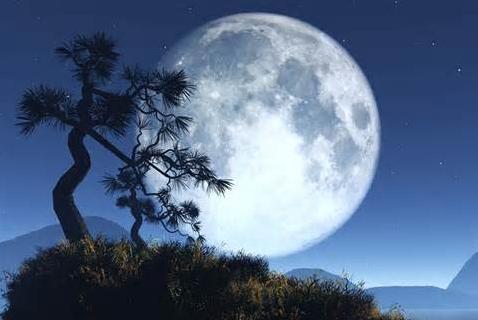 There are many myths about lunar patterns and behavior changes and a new study in Current Biology suggests a link between insomnia and the full moon. Many people complain of “lunar insomnia” and there are legends about everything from full emergency rooms to prison riots when the moon is full.

The study in Current Biology, conducted in a circadian laboratory for four nights surrounding a full moon, found a solid link. Study participants had more difficulty getting to sleep, slept 20 minutes less than normal and lost about 30 percent of their “deep sleep” time. Additionally, the measured level of melatonin, which is known to help regulate wake and sleep cycles, was reduced. Subjects were evenly split between genders. The youngest participant was 20 years old and the oldest was 74.

On the other side of the argument, there are a multitude of other things that can contribute to insomnia: emotional disorders such as depression and PTSD, neurological disorders like Alzheimer’s or chronic pain. Thyroid and gastrointestinal disorders like heartburn are other culprits, along with breathing issues like asthma and menopause. Insomnia can also be a side effect of some medications.

People with issues sleeping should always report the issue to their physician so the doctor can determine whether it may be caused by any of the above (called “secondary insomnia”) or if the sleep deprivation is due to a change in the person’s environment, like travel or a change in work schedules. Insomnia is a serious disorder as lack of sleep has been linked to everything from obesity to wrinkles to a reduced libido. A routine lack of sleep also increases a person’s risk for more life-threatening conditions like diabetes, stroke, high blood pressure and heart disease.

The risk factors for developing insomnia are varied, particularly in the U.S. More women have trouble sleeping than men, and sleep troubles seem to develop later in life. Research shows that African Americans have more trouble with sleep than Caucasian Americans, with black Americans also having more breathing problems related to sleep and sleeping lighter. Other risk factors include stress, lack of exercise, frequent travel across time zones, lower income, depression and frequent changes to a person’s work schedule. There were no studies until recently that suggested a solid link between insomnia, or any sleep disruption, and the full moon.

According to an article in Live Science, published long before the Current Biology study, studies comparing the lunar phase to events like violence, births, hospital admissions, seizures, suicide or death found no correlation, despite how often they were repeated. Because the human body is three quarters water, many believe the moon works on people as it does on ocean tides. High and low ocean tides happen when the gravitational pull of the moon pulls on the waters of the Earth in one direction or another, but it has never been proven that this same large-scale gravitational change affects humans.

Over the last decade, studies have investigated the possibility of the moon having effects on epilepsy, emergency room and psychiatric visits, and surgical outcomes. All of them found no significant difference in the outcomes during the three nights surrounding a full moon. However, there were other studies wherein the effects of the moon could not be completely dismissed for animal ER admissions, animal attacks, menstruation and sleep deprivation. As far back as 1999, researchers suggested that the full moon could disrupt the sleep-wake cycle and cause insomnia – this latest study from Current Biology supports a link between the two.