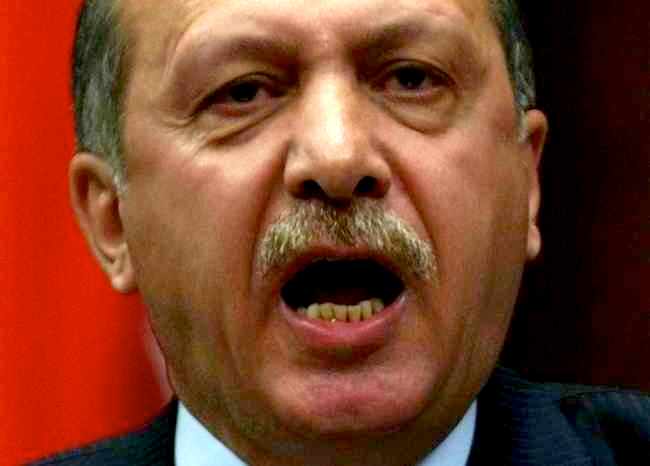 Recep Tayyip Erdogan, the prime minister (PM) of Turkey, has compared what Israel has done in the Gaza Strip with Hitler and the barbarism of Hitler’s Nazis. Speaking before supporters in Ordu on the Black Sea, Erdogan blasphemed his education by being consciously inaccurate and vile when he said “ … their barbarism has surpassed even Hitler’s.”

In the current foray into the Gaza Strip, Israelis have killed approximately 1,200 Palestinians. To be clear, Hitler and his army of hypnotized worshippers not only killed millions of people but murdered them, meaning that lives were terminated and family lines severed on purpose. Anyone not consumed with their own anti-Semitism understands the distinction

Many Arab civilians have died in the Gaza Strip. At the least, Israel has made attempts to avoid this by warning civilians ahead of its bombing strikes with the use of dummy bombs, text messages and telephone calls. (Perhaps it is true, as has been reported, that the human shields Hamas puts in harm’s way are not allowed freedom of movement, thus generously contributing to the death toll.) Even the United States and Commander-In-Chief President Obama do less than this when U.S. drones kill terrorists in far off lands. Like so many guerrilla armies before it, Hamas fighters hide amongst the people it purports to protect and represent.

Again, yes, the deaths in the Gaza Strip have been undeniable and horrific. But by no means is what has, and is happening, there a Holocaust. What it is, most unfortunately, is a moment for anti-Semites to express their hatred. Logic is pushed aside as bigotry converts to delirium and then inevitably inflates in magnitude. Again: 1,200 killed compared with 6 million-plus murdered.

It is troubling and ironic that Erdogan, the PM of Turkey (of all places) has said out loud that Israel has surpassed Nazi barbarism. His remarks deny yet again the genocide his own country committed against 1.5 million Armenians during and after World War I. At least Germany, as sick and twisted as its own episode was, is conscious and aware of its own nightmare and has apologized for it on the global stage. Erdogan’s words, however, are simply absurd.

The anti-Israeli argument, that its attacks in the Gaza Strip have lacked proportionality, is illogical. By its actions and words, Hamas has shown that it would not have stopped shooting rockets (now over 2,000) at Israel (the country it continues to say has no right to exist) if it would have pulled back on its bombing campaign. Also, Hamas would certainly not have destroyed its own tunnels had Israel retreated at any time since the war began July 8.

Israel is not at all perfect and much of the world has grown impatient with it. Its unfettered colonization of the West Bank has angered many. Yet, again, the question of proportionality arises. Over the approximately 1,300 days since civil war broke out in Syria, anywhere from 115,000 to 171,000 people have perished. On any one of those days Europeans could have likewise protested the horrors the Syrian government has liberally imposed on its fellow Syrians. After all, throughout these three and one-half years Syria has continued to gas its own people, bomb the living daylights out of them and torture tens of thousands. Europeans and others have remained silent throughout.

Not unlike the Nazis, the Syrian government has diligently recorded its own atrocities with photographs, etc. This is where comparisons to Hitler should be focused. Nevertheless, Erdogan and others irresponsibly flap their gums, fanning the flames of millenia-old hatreds against Jews.

In the area of the world they share, Turkey and Israel are rare democracies. As such, Turkey continues to have before it the opportunity to build another vibrant, thriving society. But comments such as those from its PM, that Israel surpasses the Nazis in its barbarism, cynically and sadly plays to the lowest common denominator and keeps the country from fulling participating in its own, surely glorious potential.