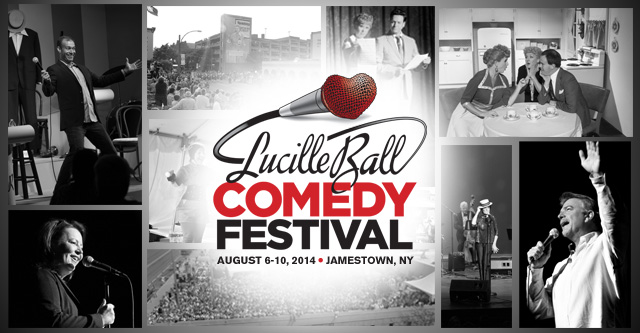 Lucy Fest 2014 scored another win with its second Stand-Up Comedy Showcase at the Reg Lenna Center for the Arts in Jamestown, NY, which featured America’s Got Talent runner-up and comedian Tom Cotter and his wife, fellow comic Kerri Louise, as his lead-in act for their performance on August 8. The comedians performed as part of the annual Lucille Ball Comedy Festival, which runs from August 6-10 this year. The married comics proved to be a potent dynamic duo and really thrilled the audience with their comedic stylings. Cotter and Louise played to a packed theatre and appeared as the second of three stand-up comedy showcases presented over three evenings for Lucy Fest 2014.

The first evening featured well-known comedienne and actress Caroline Rhea (Sabrina, the Teenaged Witch) as the headliner, along with three up and coming comics (Moody McCarthy, Andrew Norelli, and Carmen Lynch) to round out the first comedy showcase on August 7. Then, Cotter and Louise took stage for the second evening showcase on August 8, followed by former Tonight Show host and well-respected comedian, Jay Leno, who was poised to dominate the third evening of comedy on August 9. Leno sold out his venue a mere three weeks after tickets went on sale back in April 2014.

The Lucille Ball Comedy Festival had another hit on its hands with America’s Got Talent runner-up Tom Cotter and his wife, Kerri Louise. The dynamic duo proved to be a potent comedy team with killer timing, as the evening began with Cotter’s opening act, Louise, invigorating the crowd with witty and relatable banter. She spoke about the triumphs and traumas of parenthood, as well as married life. The comedienne clued the audience into her glee at being considered a “yummy mummy” by her sons’ friends and her wish to be a man. According to Louise, her desire to be a man stems from her belief  that men are generally unconcerned about other men’s looks as well as their own.

Following Louise’s successful opening set, Cotter appeared onstage and the married couple exchanged witty, contagious banter that energized the theatre. They proved to be a potent and killer comedy duo as they effortlessly played off each other. The dynamic duo definitely pleased the crowd and did the Lucille Ball Comedy Festival proud. There was a synergy in the air when they appeared and played onstage together. After several minutes of witty banter exchange, Louise exited the stage and yielded the floor to Cotter.

Cotter told the audience he was a Buffalo, NY native, who now resides in NYC with his family and loves the aroma of urine. The comedian scored big points with the audience as he railed against the airlines and the preferential treatment first-class passengers are given. He also learned the perils of any suggestion of harm coming to canines. This region is chock full of dog lovers and the boundaries were made clear to Cotter, who quickly redirected his comedic efforts toward canine size comparisons and the maiming of felines. Cotter’s cat rant brought many laughs and won the audience back in short order. Felines beware–this region is all about the dogs! Cotter continued his performance and commented on various topics ranging from tattoos, GPS recorded voices, growing up in a big, Irish family, and the dangers inherit within nursery rhymes.

The Lucille Ball Comedy Festival went two for two in its hit parade for 2014 with America’s Got Talent runner-up and comedian Tom Cotter and his wife, Kerri Louise. The dynamic duo proved to be a potent comedy team with killer timing and impeccable onstage chemistry. The married comics played to a full house and thrilled the audience with their witty banter. Cotter and Louise appeared as the second of three stand-up comedy showcases presented over three evenings for Lucy Fest 2014. Former Tonight Show host and comedian Jay Leno will headline the third and final comedy showcase for the 2014 Lucille Ball Comedy Festival on August 9. The comedy acts have truly risen to the occasion and Lucy would be proud.