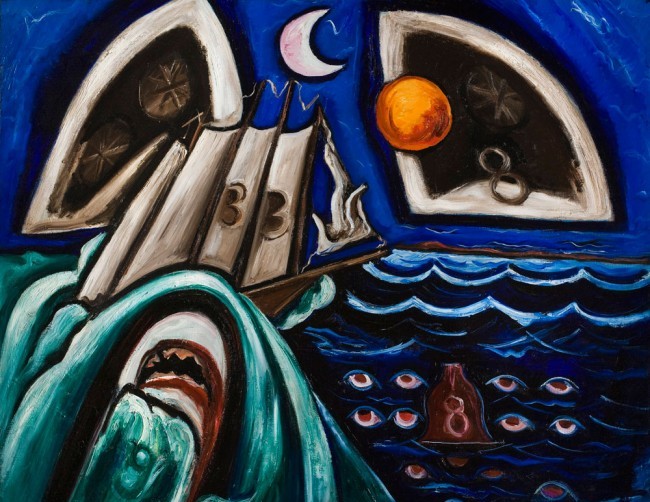 The 20th century American modernist painter, Marsden Hartley had an affinity for Europe. He often gathered with a circle of American artists that included John Marin, Arthur Dove, Georgia O’Keeffe, Charles Demuth, Edward Steichen and Alfred Stieglitz. In 1912, after a successful exhibition at the 291  gallery in New York, the Maine native, Marsden Hartley went abroad with the help of Stieglitz and American artist, Arthur B. Davies, where he remained until 1915.

The Los Angeles County Museum of Art (LACMA) opens Marsden Hartley: The German Paintings 1913-1915 until November 30, 2014. The exhibit coincides with the centennial commemoration of World War I.

The impact of World War I on Hartley was profound, and this display marks the first focused exhibition of Hartley’s Berlin paintings in the United States. Stephanie Barron, senior curator and department head of modern art at LACMA noted, “The Los Angeles showing positions Hartley both at the forefront of American modernism and within the context of the European avant-garde.”

In Paris, the painter frequented Gertrude Stein’s art salon and studied Cubist fundamentals. From there, Hartley traveled to Germany where he exhibited at First German Autumn Salon in Berlin and with the Der Blaue Reiter (The Blue Rider) group led by German Expressionist painter, Franz Marc and Russian painter, Vasily Kandinsky in Munich.

The works on display from this period in Hartley’s life reflect a dynamic transformation in style and subject matter. The canvases combined Cubism along with European modernism, melded  in non-Western motifs and military symbolism. 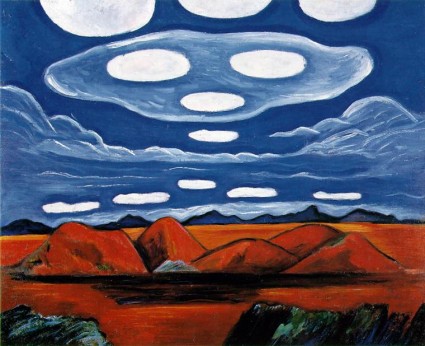 Marsden Hartley, like Alfred Henry Maurer, and John Marin had been American born and bred but lived abroad. Not unlike the other American artists, Hartley’s encounter with the modern movement was an attempt to adapt what he had learned from his upbringing in America to the styles and methods established by Europeans for the interpretations of dissimilar experiences.

Considering Berlin as his second home, Hartley’s German sympathies possibly explain “the power as well as [for] the clumsiness of his paintings.” When in Berlin, the Maine artist developed an avant-garde style that reflected his modern setting and the turbulent period preceding and during World War I. Berlin’s appealing metropolitan, its famed gay community and military pageantry had a significant influence on the painter.

He completed his first canvas, Painting Number One (1913) following an introduction to Kandinsky in Munich. In a succession of black, “peak-like lines” like his beloved Maine mountains except in disembodied forms, “climb the surface amid bursts of glowing color.” For this canvas, Hartley implemented thin brush strokes; the work was more audacious than other works by the painter.

While Hartley moved between abstraction and symbolism, his Berlin paintings revealed the effects of the war and demonstrated his fascination of military symbols and Native American motifs.

His canvases featured bold color, complex abstract compositions with a collage-like appearance. He evoked the eclat, pageantry and vulnerability of Berlin life during World War I with bright banners along with fragments of military regalia and insignia on black backgrounds. His works also signified Hartley’s love of military pomp and pageantry, his infatuation with a Prussian officer, Karl von Freyburg, who died early on in the war and his revulsion of wartime destruction.

Deep in sorrow after von Freyburg’s death, he  began his Berlin War Motif canvases. The works exhibited impassioned brushwork and a “skillful synthesis of Cubism and German Expressionism.” It is best-expressed in his symbolic portrayal of von Freyburg. With areas of black exposed within bold color, Portrait of a German Officer (1914) used visual fragments – silver-threaded tasseled sash, von Freyburg’s initials, K.v.F., the officer’s regiment number along with the Iron Cross received posthumously and the age in which he died. While the series was in memorial to his lost companion, Hartley’s paintings were transformed into the rich exploration of abstraction and realism with color and military motifs.

In his Amerika series, the painter explored Native American imagery with the use of geometric configurations of arrows, bows, and tipis comprising his geometric compositions. While abroad, he developed an admiration for Native American spirituality. He visited ethnographic museums in Paris and Berlin in order to further explore the traditions and art of the people.

In this exploration, Marsden Hartley was not alone. Germany has had a long history of interest in Native American cultures including other German Expressionist painters such as August Macke. Hartley’s Amerika series exposed the artist’s affinities with the work of his modernist peers, Georges Braque and Pablo Picasso whom he had met in artistic circles.

These particular works also conveyed the increasing distaste for the manner in which the United States government treated indigenous communities. Hartley’s compositions of well-balanced geometric symbolism integrated with abstraction and figuration using various Native American motifs and vivid colors. Other paintings from this period similarly combined representational objects and abstract designs, which generated dynamic studies with crossovers of spirituality and mysticism.

In autumn 1915, Hartley was applauded for his exhibition at Berlin’s Muchener Graphik-Verlag Gallery. The painter remained in Berlin until 1915, most likely just prior to the United States entering World War I. After Berlin, the painter reestablished himself once again in Maine’s mountains and shores. For the first time in his artistic career, Hartley published his writings and began figure drawing with even more expressiveness than his Berlin series.

Whether he was submerged in avant-garde circles or exploring European Modernism, Marsden Hartley’s expressionist style took him from the backwoods and shores of Maine to Europe and back again until his death in 1943.

One Response to "Marsden Hartley Berlin Exhibition at the LACMA"