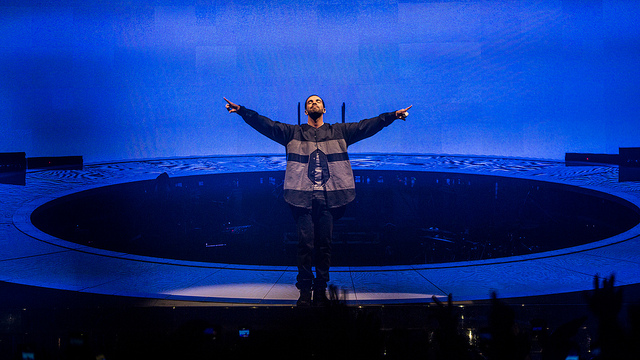 In the NBA, one of the more controversial moves an employee of any franchise can make is tampering with a player, executive, etc. from a different team. This tampering can range from two players meeting away of the basketball court to a general manager publicly persuading a player to sign with his respective team. On Monday, the NBA, in a questionable move, announced that they would fine the Toronto Raptors $25,000 due to their global ambassador, Canadian rapper Drake, courting an opposing player.

The tampering action occurred last week when Drake put on a performance at the OVO Fest. Kevin Durant, the 2013-2014 MVP and current Oklahoma City Thunder player, was present at the performance. After spotting Durant in the crowd, Drake put it upon himself to point him out. When pointing him out in the crowd, he wanted to show his friend what it would be like if he joined the Toronto Raptors. As a result, the crowd cheered wildly, followed by a loud “KD” chant.

During the OVO Fest performance, the shout out to Durant could be taken a few ways. On one end of it, Durant chose to go to the show, as a show of support to his friend Drake. In those regards, the rapper chose to welcome his friend, with open arms, to the Toronto festival. He did not directly make a pitch to the small forward.

On the other end of the argument, Durant will be a free agent in two summers. Therefore, the NBA may have looked at this scenario as an indirect pitch to Durant. After all, NBA rules dictate that tampering is “when a player or team directly or indirectly entices, induces, or persuades anybody who is under contract with another team in order to negotiate for their services.” This is where this scenario gets tricky. Durant, while he is an athlete, is also considered a celebrity. It is understandable that celebrities like to point out fellow celebrities during concerts. Additionally, it is no surprise that he would get cheered. In fact, it is likely that Durant would get cheered no matter where he goes. However, in this case, the NBA felt that, since Drake does represent the Toronto Raptors, he used the fans to persuade Durant to come to Canada in 2016.

What makes things trickier in this scenario is that, as mentioned, Drake is a global ambassador of the Toronto Raptors. As such, he represents the team; however, while he does represent the team, he is not under a contract, nor does he have a regular salary, like most Toronto Raptor officials. Additionally, Drake did not fully pitch for Durant to sign with the Raptors. Moreover, Durant cannot even sign with Toronto or any team for two full seasons, making this “pitch” a bit of an overreaction. Instead, this fine to the Toronto Raptors is most likely a way for the NBA to make an example out of someone, despite the unlikelihood that Durant will be a future Raptor.

Of course, this comes on the heels of reports that Durant may skip town to head home to sign with the Washington Wizards in 2016, much like how LeBron James did this offseason to Cleveland. It could simply be that Drake’s shout out to Durant came at a bad time. It is possible that, without the rumors of Durant leaving to Washington, the NBA may have ignored it. Unfortunately, with the media speculation at all-time high on Durant’s possible future, the NBA did what they could to minimize the Kevin Durant rumor mill.

Kevin Durant is, arguably, one of the top five players in the game today. Like LeBron James and Carmelo Anthony, his future will be speculated upon throughout the next few years. As such, the NBA, with a questionable move, felt it was in their right to fine the Toronto Raptors, who they believe publicly tampered with MVP Kevin Durant using Drake as their global ambassador. As a result of this fine, commissioner Adam Silver and the NBA has put down the hammer in order to prevent future tampering. Drake’s comments may have been harmless, but the NBA wants to ensure equal rights to all of its employees and ambassadors, regardless of the Canadian rapper’s intentions.