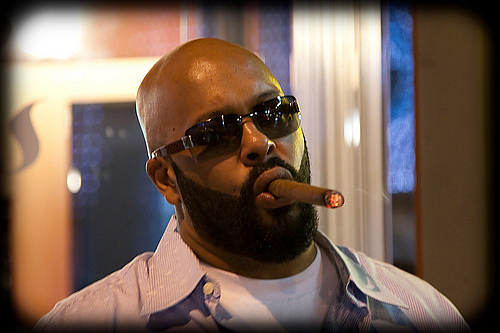 Marion “Suge” Knight is still in recovery after a shooting caught on video left him in ICU at Cedars Sinai Hospital.  Knight, who was shot six times during a pre-VMA party in West Hollywood Sunday morning, reportedly walked out of the club with the injuries before a police officer called an ambulance to take him to a hospital.

The club was allegedly “packed” with hundreds of people when shots were fired around 1:40 a.m. according to Sgt. Chris Tatar, the West Hollywood division watch commander for the Sheriff’s Department. Deputies arrived on the scene, drew their weapons and requested club goers exit the club while holding up their hands. “We didn’t know who was who at that time,” Mr. Tatar said.

Loud pop sounds were heard ringing out before the 2 a.m. close time at 1 Oak nightclub in West Hollywood, where Chris Brown hosted a pre-party for the MTV Video Music Awards.  Knight, who is 49, was allegedly shot six times in the stomach, arm and other areas that are still unknown. Two women on the scene were also injured; one remains in critical condition. Detectives claim to have video that shows a man firing a gun at the former Death Row Records exec, before turning the gun on two others.

Knight’s shooting suspect, who was caught on video, is said to be seen running from the nightclub along with dozens of others who spread out when the shots began. The suspect has not yet been identified, and the handgun used by the assailant has not been found. Among others who were there, besides Brown and Knight, were Justin Bieber and model Tyson Beckford.  As ironic as it sounds, this is not the first time Knight has been targeted at a pre-VMA engagement. In 2005, he was shot in the leg at a Kanye West hosted party held in Miami. Suge filed a lawsuit against Kanye in 2008 for mental and physical anguish, and for a $147,000 diamond earring.

Knight, who filed for chapter 11 bankruptcy in 2006 to avoid losing control of his Death Row Record label in a $100 million dollar civil suit, founded the label in 1991, along with Dr. Dre.  The record company had a string of hits and multi-platinum albums, and was also responsible for launching the careers of superstars like Snoop Dogg, Dr. Dre, and the late Tupac Shakur.  Those who may be familiar with Mr. Knight, know that he is no stranger to trouble, as he was released from prison back in 2001 after serving nearly five years for a parole violation. He was also in the car when rapper Tupac was shot and killed in Las Vegas. In a statement on Revolt TV, Knight’s family asks for  public prayer and thoughts during this time, and to stay away from negativity. A family member was quoted saying,

He has done a lot of things for the community and the entertainment culture as a whole, so we ask that you please respect that.

Still reeling from the shooting that almost claimed Knight’s life, the family waits for the suspect to be caught as detectives study details of the video. According to sources close to Knight, an authorized biography about his life is in the works. In the meantime, the investigation continues.