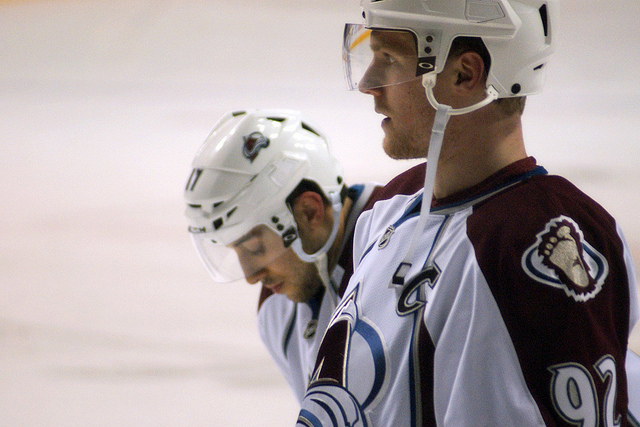 With less than a month before the start of hockey’s regular season, the Guardian Liberty Voice will be taking an in-depth look at the 30 organizations, one for each day. Today, 30 in 30 will look at the Colorado Avalanche. Colorado surprised everyone last year, as such success immediately after drafting first overall is a rare feat. However, the combination of budding superstar Nathan MacKinnon and newly hired head coach Patrick Roy seemed to work wonders for the Avalanche, kick-starting what should be a very bright future. This year, the Avs look to build on their successful “rookie” season.

Last Season – The Colorado Avalanche entered last year with tempered expectations. They had just drafted Nathan MacKinnon first overall, adding to their dangerous offensive talent. However, their defense was considered below average, and their goaltender, Semyon Varlamov, had finished the year before with a career-worst 3.02 Goals Against Average (GAA) and .903 Save Percentage (SV%). In addition, the organization hired notable hot-head, Patrick Roy, to replace Joe Sacco. Roy had coaching experience in the junior leagues, but trouble always seemed to follow him wherever he went.

The season started off with a bang for the Avalanche. They dominated their first game against the Anaheim Ducks, ending with a score of 6-1 in Colorado’s favor. The game was also notable for its end-game shenanigans, which saw Roy and Anaheim’s coach Bruce Boudreau almost come to blows. The Colorado Avalanche would win 14 of their first 16 games, many of them in convincing fashion. Even misdemeanor assault charges levied against Varlamov in late November could not stop the momentum that the Avalanche had. The charges were eventually dropped.

The Avalanche finished second in the Western Conference, and third league-wide, a stark change from their basement finish in the lockout-shortened season prior. And though they finished the regular season as a high seed, they had a swift playoff exit, after a surprising seven-game series against the Minnesota Wild in the first round.

The Offseason – The Avs made some moves in the offseason, but it remains to be seen if the moves will actually improve the young team. The biggest move was the departure of long-time Colorado Avalanche Paul Statsny, who signed with Western Conference rival, the St. Louis Blues. Statsny was quickly becoming the odd man out on the Avalanche, after the great strides in development Matt Duchene has shown, and the acquisition of MacKinnon. Stastny is only 28, but he has been in the league for eight years, bringing a veteran presence to the forward corps that boasts a lot of young talent.

To keep that veteran presence, Colorado signed league-veteran Jarome Iginla to a three-year, $5.3 AAV deal. Iginla has bounced from team to team since leaving Calgary, chasing his final shots at the Stanley Cup. The Colorado Avalanche have enough talent to accomplish that feat with enough youthful energy to get them through a long playoff run. This contract will likely be Iginla’s last in the NHL, so if the veteran can not lead Colorado to a Cup win over the next few years, he may end his career without one.

The real head-scratcher of the offseason was the trade of PA Parenteau to Montreal in exchange for Daniel Briere. Parenteau had a respectable season for the Avalanche, and though his production did not match his contract, he is still a much better player than Briere at this point in both their careers. Briere is getting up there in age, and it is affecting his play. The only way this move makes sense is if the Avalanche acquired the veteran for his ability to come up in the clutch during the playoffs. With 116 points in 124 playoff games, Briere can get it done when the chips are down.

What to Watch for Next Season – The Colorado Avalanche should be an exciting team to watch next season, if only for the unpredictability of their players. It seemed just about everything went right for the Avs last year, which allowed them to make the playoffs with ease. However, one must remember this organization is also just a year removed from finishing near dead last in the league. To earn the same benefit of a doubt that teams like Boston, Chicago, Pittsburgh and Los Angeles receive, the Avalanche will have to repeat similar success consistently.

Nathan MacKinnon will play a large part in determining whether the team is successful or not. With Stastny gone, expect MacKinnon to play a larger role on the team. He had an explosive rookie season, running away with the Calder Trophy for the NHL’s best rookie. However, many players go through a “sophomore slump” in their second year in the league, as other teams have more tape to study the player, which allows them to put more focus on the youngster. MacKinnon is talented enough and creative enough with the puck to survive any additional coverage, but a “sophomore slump” remains a possibility.

Like the Avalanche, Varlamov is only a year removed from one of the worst in his career. He earned 41 wins last year, and finished the regular season with a respectable 2.41 GAA and .927 SV%. His playoff performance was slightly worse, but as long as he does not completely implode in net, Colorado has enough scoring threats on the team to overcome a deficit on most nights. Varlamov has generally been an above average goaltender for the Colorado Avalanche, but that lockout-shortened season should raise some flags.

Finally, the Avalanche’s success comes down to coaching. Patrick Roy was a legend of the game, even before coaching his first NHL season. To bring an organization back from the brink, as he did with Colorado last year, should only add to his distinguished hockey career. However, the Avalanche rarely had to face adversity last season, and that is when a coach’s true mettle is tested. If Colorado falls behind early, or is dealt a bad hand by the hockey gods, will Roy lead the comeback effort or will his hot-headed personality make another appearance?

The Avalanche took the league by storm last season. They came out of the gate ready to play, and their young players led the way to a successful “rookie” season under new coach Patrick Roy. This year, they face a different challenge. Any team can catch lightning in a bottle and get it done once. It is the truly great teams that can repeat their success, and the Colorado Avalanche are looking to prove they belong to that group.

Join the Guardian Liberty Voice tomorrow, where 30 in 30 will take a look at the unheralded Columbus Blue Jackets. Also check out yesterday’s team, the Chicago Blackhawks.