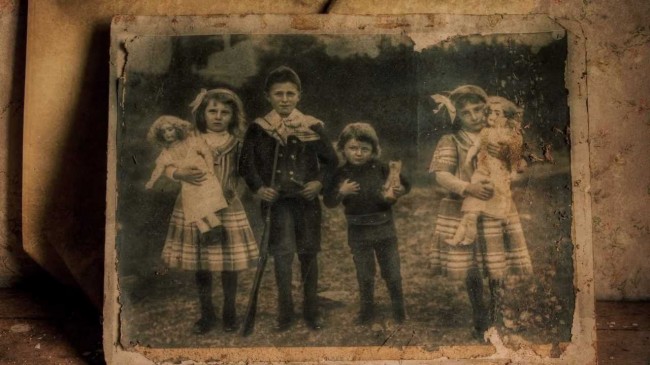 Master storyteller, Tim Burton has signed on to serve as director for the film adaptation of Ransom Riggs’ young adult thriller, Miss Peregrine’s Home for Peculiar Children. The novel is filled to the brim with twisted realties and dark story lines that deem Burton as the perfect director to helm such a project.

Miss Peregrine’s Home for Peculiar Children follows the life of Jacob Portman, a teen living in the suburbs of Florida whose life is changed forever when his grandfather dies a mysterious death. Without revealing any spoilers, the plot line continues as Jacob leaves with his father to the Welsh island of Cairnholm to uncover secrets of his grandfather’s past.

Riggs’ novel is incredibly fluid in keeping the creepy tone throughout the book’s duration, which could be responsible, in part, to the story’s setting. An interesting fact on the origin of the book is that Riggs has stated he is a connoisseur of vintage black and white photos. Riggs has, reportedly, collected hundreds of these photos, all said to be very off-kilter and can often strike a chord of fear in the faint of heart. When Riggs’ publisher became aware of the author’s collection he suggested Riggs construct a narrative out of the photos. The narrative grew into what is now Miss Peregrine’s Home for Peculiar Children and the writer’s very own collection of photos can be seen sporadically throughout the book, representing characters and events within the story.

Burton, undoubtably, jumped onto the Peregrine project as soon as it was presented to him. Not only does the tale reflect Burton’s unlikely take on reality, but the presence of parallel universes and travel between them as well. Burton’s twisted reality is seen in the likes of Edward Scissorhands and Beetlejuice and audiences will know of Burton’s love for alternate universes from his films like Alice In Wonderland and The Nightmare Before Christmas. Peregrine will present the task of adapting modern literature into film as well as taking on more mature and graphic material than some of the director’s past titles.

The Miss Peregrine’s Home for Peculiar Children film is still in the very early stages of production, as the movie is not scheduled to release until March 2016. The facts that are known include 20th Century Fox as the film’s distributor, Chernin Entertainment as the production company and Jane Goldman as the screenplay writer. No casting has been officially announced other than the rumors of 300: Rise of an Empire actress, Eva Green, being tied to the project. The actress’s interest in the project has been expressed, as she apparently has her eyes set on the titular character of Miss Peregrine, herself, but neither Green, Burton nor the production company have stated that the actress will appear in the film for sure.

Burton is reportedly interested in seeking out an unknown actor for the leading role of Jacob. This move provides an excellent opportunity to create a new star in the world of Hollywood as the mention of Burton’s name and the fan base from the original novel are destined to draw in a hefty audience for the film. An already-famous actor would not be needed in this case.

As Tim Burton gears up to adapt Miss Peregrine’s Home for Peculiar Children into a major motion picture, fans will have the opportunity to get a taste of Burton before the movie debuts. Later this year, Big Eyes, starring Amy Adams and directed by Burton, will be released and the film has already garnered a decent amount of Oscar buzz. Tim Burton is well on his way to shining in the Hollywood limelight once again and is sure to continue to do so with Miss Peregrine’s Home for Peculiar Children.