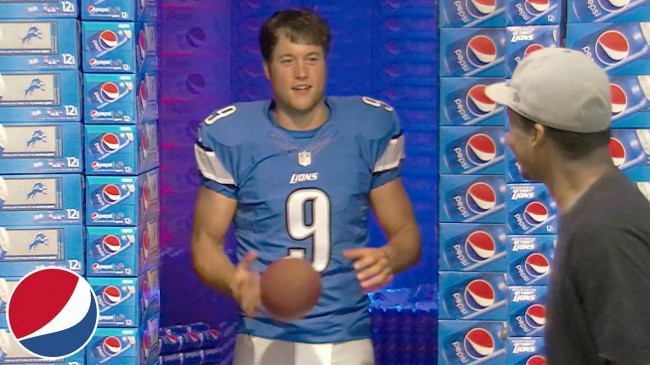 Detroit Lions quarterback Matthew Stafford is known for his skill throwing the ball, and also for his sense of humor. He shows this in this epic Pepsi commercial while surprising unsuspecting fans. He can be found doing humorous commercials for ESPN, or simply messing around with the guys on the team. He and the team recently went to London, and a small video went around of some of the guys trying to guess what certain British words actually meant. Stafford was the winner of this battle, and now he is taking it to the streets of Detroit.

Stafford is known around the state of Michigan as generous with his time and completely in touch with his fans. The most recent documentation of this, is a Pepsi commercial. Set in a Detroit area grocery store, a “can cave” is set up with the home town hero inside set to surprise fans. Fans of all shapes and sizes end up being invited in, while others just get the surprise of their lives when the quarterback runs out from the cans to retrieve a football.

The commercial goes on to show the lighter side of the Detroit quarterback as he jokes about fumbling, and requires fans to tell him the number on his jersey to gain entrance into the “can cave.”  Those that gain entrance get to party with Stafford himself in an epic back room hidden behind a wall of cans. The fans and the music get so loud it is amusing to watch those walking by wondering what is going on. The quirky sense of humor in this commercial goes on to allow entrance to a group of cheerleaders, while leaving behind a fan wishing he was in the “can cave,”

At age 26, this Florida native has been with the Detroit Lions since 2009 and things started a bit rocky, as most transitions do. Now the team is looking to get into the playoffs for the first time in many years. Currently in first place in their division, the team and their fans are optimistic for this football season. The last two games were nail-biters for sure. With the game against the Falcons looking dismal at halftime with a score of 21-0, fans waited to see if the Detroit Lions would pull it out in the second half. Turn it around they did, with a 59-yard throw to Golden Tate for a touchdown in the third quarter. They held it together for their second game in a row with a win by one point.

Detroit fans can be fiercely loyal and extremely vocal, and have been both over the past several years as they followed their team through dismal failures to change after change. With change comes growing pains and this team has seen their share of pain in the past. With the future for this team finally looking brighter, it is time for a fun look into Matt Stafford’s Pepsi commercial, and the unsuspecting fans that have made it an epic success.