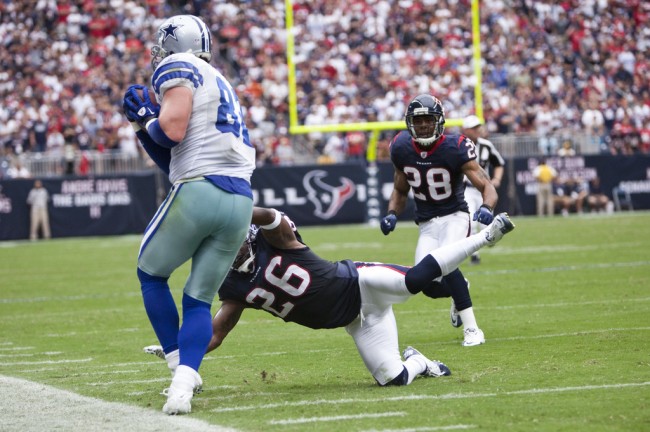 With Jimmy Graham on a bye, Julius Thomas and Antonio Gates become fantasy football’s top tight end options in Week 6. With stalwart Rob Gronkowski, they should be automatic plays, as they will always be a focal point of their team’s offense and given regular scoring opportunities.

Delanie Walker seems to have the best matchup this week. His 10.8 point per game average should not suffer against a Jaguars defense that is number 31 against all tight ends. Walker is second to Jimmy Graham in receiving yards this year.

An interesting play might be Jordan Reed, the Redskins’ tight end, whose hamstring injury may allow him to play this week. Limited in practice, he is listed as questionable. If he does come back he is facing a Cardinals defense that has given up the sixth most points to the position in standard fantasy football leagues.

Seattle’s Luke Wilson may be a sneaky play this week as well. Zack Miller is still sidelined and Wilson was on the field for 95 percent of the snaps against the Redskins. While he only caught three passes for 28 yards in that game, he is, however, facing a Dallas team that is ranked dead last in giving up points to opposing tight ends.

While Carolina’s Greg Olsen has a favorable matchup this week against the Bengals, he is still listed as questionable. The Bengals are ranked number 30 against opposing tight ends and Olsen is a favorite target for Cam Newton. While Olsen should be started in all fantasy football leagues in Week 6, it would be wise to check his availability prior to game time.

Last week aside, Larry Donnell should be started against an Eagles team that is rated sixth against opposing tight ends. While this matchup may not look enticing on paper, Donnell, nevertheless, has become one of Eli Manning’s favorite targets. The Giants and Eagles game should be a high scoring affair as both offenses have been very effective lately. Donnell is the eighth rated tight end in fantasy football.

On the other side, Zach Ertz the Philadelphia tight end is facing a Giants team that is the second best defense against tight ends. In five games they have given up a total of 19 points. Ertz has only caught 64 percent of his targets this season.

Since a stellar first game, Vernon Davis has only caught five passes for 47 yards. Lingering back issues have kept him out of last week’s game and he has been limited in practice all week.

Another tight end to be wary of is Martellus Bennett. He is facing a Falcons team that is rated tops against opposing tight ends. The Falcons allow fewer than four points per game. Considering he only scored one point against the fourth rated Carolina defense, this might be a matchup to avoid.

Some week six tight end waiver wire pickups include Niles Paul who is facing an Arizona defense that is ranked number 27 in fantasy football against tight ends. This becomes an even better play if Jordan Reed is still unable to play. The Jets’ Jace Amaro and Houston’s Garrett Graham might be worth a play for someone in desperate need of a tight end.