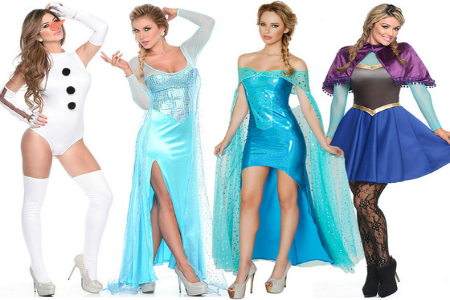 Halloween is just around the corner as stores stock up on costumes, makeup, and other items associated with the holiday. Many have started to pick out what creature, person, or ghoul they wish to be for that one day this October. This is one of a few holidays where kids show their excitement for the large amounts of candy they will be receiving from neighbors dressed up as whomever or whatever they wish to be. So, it does not seem like much of a surprise that Disney’s Frozen would be making an appearance in the costume department for this year. However, it would appear that some of the Halloween costumes for Disney’s Frozen have been ruined due to the fact that they are, as seen with many other outfits over the years, a little more provocative than one would imagine for a movie aimed towards children.

Disney’s Frozen might have been ruined due to the set of this year’s Halloween costumes. The biggest upset with these costumes comes from the Olaf Costume. When thinking of the enchanted talking snowman from the movie, with his extremely warm heart and love of hugs, one would not think of him as being sexy. Since Frozen is essentially geared towards that of younger audiences, the costumes in question appear to be slightly inappropriate. Olaf’s costume, for instance, would not suggest that the wearer is a snowman in the least. In fact, the costume details a white leotard that is quite revealing and skin tight, a pair of white knee-high stockings, and a strap on carrot nose with elbow high sleeves for Olaf’s arms. It would seem that there isn’t much to the costume at all, but that appears to be the point.

Even Elsa’s costume looks to be out of place and the child image of her in Frozen becomes ruined by the choices of her Halloween costume. As described by one article, the slit in the skirt sails all the way to the “Ice Queen’s castle,” while the other version of Elsa’s costume leaves little to the imagination. As for Anna, one article goes as far in the description of her costume to be something similar to that of a barmaid ready to serve alcoholic beverages rather than being one of the respected heroines to the story.

Disney’s Frozen is not the only thing to be ruined by adult versions of Halloween costumes. It would seem that many things geared towards younger audiences appear to eventually become distorted into sexual or adult content. This stems from Disney films to cartoons and even kiddie-like comics. Some comments about these choices in Halloween attire have stated that “nothing seems to be sacred anymore,” as well as some saying that not everything needs to be turned into something sexual for it to sell. Other comments on social media sites like Facebook and Twitter have shown anger in what designers have chosen to do.

All in all, it does appear to look as though the Halloween costume choices this year concerning Disney’s Frozen have ruined the childlike wonder that originally came from the movie. The distortion of sexuality in the everyday world has perhaps taken a step too far over the line and as Halloween draws closer and closer, it would appear that it is not going to stop.