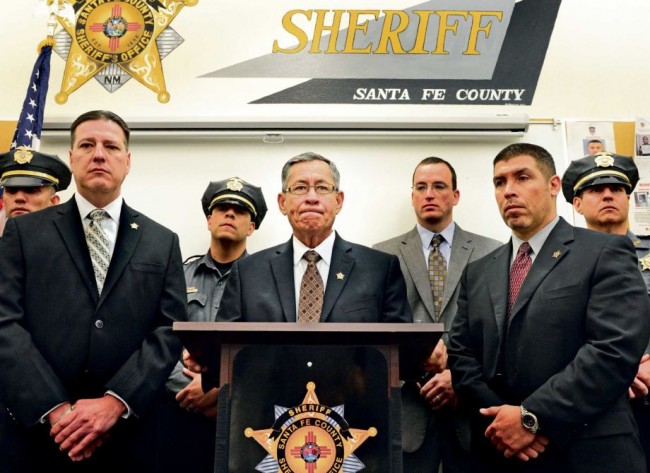 Though the ideal is that cops are supposed to get the bad guys, the most recent cop killing in New Mexico is causing outrage as one sheriff’s deputy was shot – by none other than his partner. Tai Chan, a 27-year-old sheriff’s deputy in Santa Fe, New Mexico, is now facing charges for killing his colleague, 29-year-old Jeremy Martin. Chan is currently being held without bail as detectives investigate and try to find the reason why such a thing would happen. As Sheriff Robert Garcia tried to hold back tears, he expressed to the media that he could not believe that something like this would ever happen, and the the culprit and victim would be two of his own men.

On Tuesday morning, just after midnight Jeremy Martin was shot, supposedly from an altercation with Tai Chan that started late Monday night. According to sources, the two had just finished extraditing a prisoner to Arizona, when the were staying at the Hotel Encanto de Las Cruces in New Mexico. They were seen together on Monday night at a pub in Las Cruces, when they began having a fight. Witnesses say Martin was trying to leave the scene and go to the elevator when Chan shot him in the back and arms.

Martin was taken to MountainView Regional Medical Center where he was pronounced dead from fatal gunshot wounds. He left behind a wife and three kids, who received the news from Sheriff Robert Garcia. Though the wife had no comment at first, as she was still trying to take it all in, many others have voiced their comments on the horrific situation that happened in New Mexico.

Tai Chan is now being held at Dona Ana County Detention Center in New Mexico awaiting the results of his trial. Investigation is still underway to determine exactly what happened, but according to witnesses they believe the shooting had to do with whatever the two were arguing about. Evidence from a deputy vehicle was found and collected from the parking lot, as investigators inside the hotel taped off the area with crime scene tape and worked to find any evidence.

Witnesses say that the two were seen in, at least, three restaurants including Dublin’s Street Pub. The altercation was believed to be heavily fueled by alcohol, though no witnesses have come forward to help investigators understand what was said in the fight or what may have caused Chan to decide to pull out his Glock and gun down Martin. Though not much information has been released to the public, the Sheriff and his team did hold a press conference to fill the public in on what details they could. This is where Sheriff Robert Garcia gave his speech while holding back tears. He stated that both men were “hardworking, committed individuals.”

Tai Chan had been on the force for three years and Martin for over two. The media has not been informed at how long the two men had been working together. As investigators continue to work at solving the case, details are expected to be released. No court date has been set, thus far, on Chan as the investigation is still in its early stages. Though they do not yet have enough evidence to prove that it was Chan, he is the primary suspect involved. The New Mexico deputy currently faces charges for the killing of his colleague.