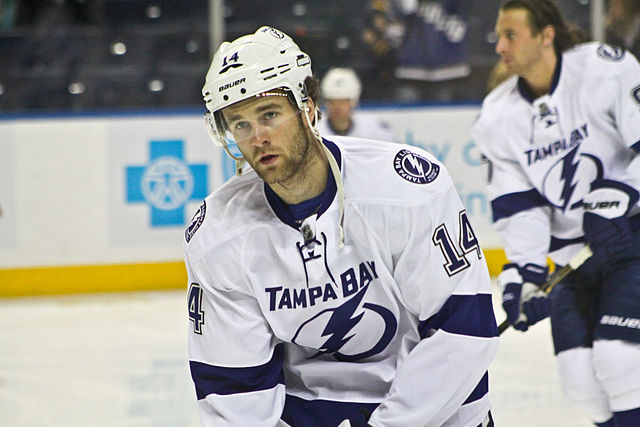 With the start of hockey’s regular season less than a week away, the Guardian Liberty Voice will be taking an in-depth look at the 30 organizations, one for each day. Today, 30 in 30 will look at the Tampa Bay Lightning. Tampa Bay has been a very up-and-down team the past few seasons. In the lockout-shortened 2012-2013 season, the Lightning drafted 3rd overall after finishing near the bottom of the league. However, last year, the team surprised many by making the playoffs with over 100 points on the season. Last year also saw a major change in the Tampa Bay organization, one that will affect the team this year, as the Tampa Bay Lighting begin their Marty-less era in 2014.

Last Season – The Lightning were expected to struggle last year. After all, the team had just come off a season where they finished 14th in the Eastern Conference, and they were moving from a weak Southeast Division to a difficult Atlantic Division. Tampa Bay surprised many by not only surviving in this new division, but thriving. By the end of the November, the Tampa Bay Lightning were within a stone’s throw of the Boston Bruins for the division lead, a testament to how a good team can rebound.

Their early season success was made even more impressive by the fact they were doing it without their best player. Elite center Steven Stamkos broke his tibia after crashing into a goalpost in mid-November. The injury would keep him out of the lineup until March, but Tampa Bay did not collapse during his absence. Rather, Ondrej Palat and Tyler Johnson had breakout rookie years, allowing the Lightning to maintain their winning ways until Stamkos returned.

The biggest move of last season was the trade of long-time Tampa Bay Lightning icon Marty St. Louis. St. Louis was traded to the New York Rangers around the trade deadline, supposedly at the request of his family. However, many believe that the decision to initially leave St. Louis off of Team Canada’s Olympic roster, a decision that was made by Tampa Bay’s general manager Steve Yzerman, played a large part in his request to be traded.

Unfortunately for the Lightning, starting goaltender Ben Bishop left a game with an injury in early April, just weeks before the start of the playoffs. Bishop was a large reason why the Lightning were so successful last year, and without him between the pipes, Tampa Bay struggled in the playoffs. Facing off against the Montreal Canadiens in the first round, the Lightning were swept from the series, due in large part to the play of backup goaltender Anders Lindback.

The Offseason – The Tampa Bay Lightning spent the offseason addressing their weaknesses and attempting to move on from the loss of Marty St. Louis. One of the best ways to do that was to re-sign the key piece they received in return for St. Louis. Ryan Callahan, former New York Rangers captain, signed a six-year, $34.8 million contract extension to stay with the Lightning for the foreseeable future.

Callahan was joined by former Ranger teammates Anton Stralman and Brian Boyle. Stralman signed a five-year, $22.5 million deal, while Boyle signed for three years at an average of $2 million per year. Stralman was a strong defensive force on the backend for the Rangers, while Boyle was a solid bottom six player who could chip in offense when needed.

The additions of Callahan, Stralman, and Boyle should make the Tampa Bay Lightning more well-rounded and more difficult to play against. Tampa Bay has never been known as the most physical team in the league, something they could get away with while playing in a weak Southeast division. However, in a division with the Boston Bruins, a team will need some kind of physical presence to compete for the division title.

What to Watch for This Season – This year will likely maintain the unpredictability of the Lightning. With much of their season depending on new additions or inconsistent players maintaining their high level of play, Tampa Bay could finish very high if everything works out or very low if nothing does.

The two star rookie players for the Lightning last year, Palat and Johnson, will be watched closely in 2014-2015. Like every rookie, there will always be the fear of the “sophomore slump,” which may be even more likely for these two players, as Stamkos will, barring unforeseen circumstances, remain healthy this year. However, if one of the two can eat up the minutes that St. Louis’ departure left, that player could have a similar or better season than their rookie year.

Ben Bishop should start the season healthy, which is good news for Tampa Bay Lightning fans. He was THE biggest reason for their success last year, and their season went off the rails almost immediately after he was injured. The organization addressed that a bit by signing Evgeni Nabokov in the offseason, but make no mistake, if Bishop regresses, the Lightning will be in trouble this season.

Tampa Bay is ready to begin the Marty-less era of the franchise. Steven Stamkos has taken over as the sole face of the franchise, as well as the captain’s “C”. There are few better players in the league that an organization can build around, and the Tampa Bay Lightning are set to do just that.

Join the Guardian Liberty Voice tomorrow as 30 in 30 will examine how the Toronto Maple Leafs can take the next step. Also check out yesterday’s article, St. Louis Blues: Cup Contenders or Paper Tigers?