The Originals: The Vampire Diaries for Adults Starts Season Two on Monday 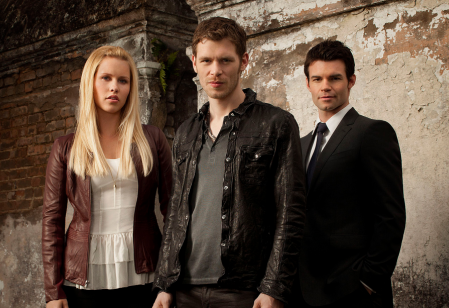 The Originals, which could be called The Vampire Diaries for adults starts season two on Monday October 6. The biggest news for fans of both shows is that Nina Dobrev is “defecting” from TVD to the spin off series to play “Tatia” in a flashback. Apparently she will be working with Joseph Morgan (Klaus) and Daniel Gillies (Elijah). The time period of the doppelganger episode is in “viking times” and according to Nina herself, Tatia is the very first doppelganger, the most pure and most “unaffected.”

The character of Tatia was first mentioned way back in season three of The Vampire Diaries. Now Dobrev will bring the “viking” doppelganger to life in episode five. This crossover will obviously excite fans of both shows since Nina is a firm favorite from TVD and The Originals has such a great storyline along with the fact that it is set in New Orleans.

Luckily all fans of the spin off can catch up on the events of season one via Netflix to get ready for Nina’s episode and the premiere of The Originals’ first season two episode. Although binge watching that many episodes and dealing with the hybrids, witches, vampires and werewolves may exhaust the most ardent fan. There was certainly a lot of action throughout the entire 22 episode first season, big battles and enough vitriol between the different factions, as well as family members, to halt a hurricane in its tracks.

The Vampire Diaries spin off The Originals had a pretty action packed season one finale. This more adult “supernatural” series starts season two on Monday and it should be interesting to see what is in store now that Esther has returned. Episode 22 From a Cradle to a Grave had some white knuckle events and a close call for not only baby Hope, but for her mother as well.

For those that have forgotten, here is a quick rundown of the last episode:

Klaus even gets in a spot of bother when he tries to save both his baby and Hayley. Davina finally brings Mikael back after Marcel summons him but there is a catch, he is under her control. The last time that Klaus’s father is seen, he is in the witch’s attic on his knees. After fighting Klaus for the ownership of New Orleans Marcel ends up taking blood from his adopted father to live although that was not his original plan.

By the season one finale of The Originals, the witch coven’s plans fail and Genevieve pays with her life for her betrayal of Klaus, Hayley and Elijah. Once Hope is rescued from the witches, in a pretty impressive little battle which had the recently back from the dead mother of the baby helping to kick butt and kill Genevieve, plans have to be made to keep her safe. Kudos for the bloody tears thing with the dying witch before Hayley puts a knife into her foe.

Baby Hope is sent off with sister Rebekah who promises to keep the infant safe from the witches. Marcel has his vampire followers depleted even further when Mikael feeds off them as they lay injured and dying from the wolf bites inflicted during the big fight. This spin off of The Vampire Diaries will presumably start season two with Esther walking the earth again to hunt down her enemies amongst the adults of The Originals. Nina Dobrev will not, obviously, be in episode one, so fans will have to wait that little bit longer to see her as Tatia. The show airs Mondays on CW.

2 Responses to "The Originals: The Vampire Diaries for Adults Starts Season Two on Monday"