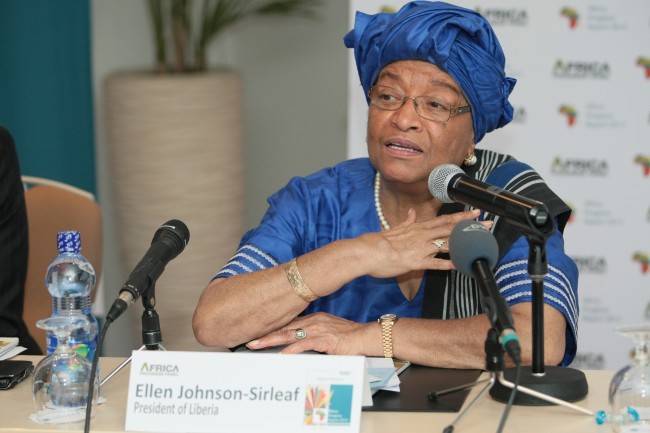 With the goal of stopping the spread of the deadly Ebola virus, Liberia’s President Ellen Johnson Sirleaf said December 25 is the day she hopes to eradicate new cases. In a nationwide address on Sunday, Sirleaf acknowledges the nation’s recovery will be difficult. She already ended the national state of emergency on Thursday. To help with making strong improvements, Sirleaf appointed new members to her cabinet including health, education, and public works ministers. George Warner will take over as the new health minister, replacing Walter Gwenigale. Warner is the former head of the civil service.

Of Gwenigale, who is retiring, Sirleaf said he “will continue to work with me on the presidential advisory Ebola committee.” Critics of the country’s erratic response have cited a largely ineffective effort which sought to quarantine large areas of major cities. Other measures included closing schools, shutting down markets, and restricting large gatherings. Despite these responses, Liberia had a confirmed 2,812 deaths, more than any other country in Africa.

The World Health Organization (WHO) reported a total of 5,165 deaths in the three West African countries hit the hardest, Sierra Leone, Guinea, and Liberia. In her radio address, Sirleaf said the country would “continue to combat the Ebola virus” and attempt to reach “zero new cases by Christmas.” Last week, WHO reported that the incidence of new cases was already starting to decrease in certain counties. Of Liberia’s 15 counties, two of them have reported a decline in new infections.

Citing these gains, Sirleaf declared that markets could be reopened and students reorganized into cleaning crews for school facilities. Deciding to reopen the schools to the nation’s children will depend on reaching President Sirleaf’s new goal of Ebola’s complete eradication from Liberia. Sirleaf said the task would not be complete until nearby countries of Guinea and Sierra Leone were also Ebola free. The outbreak in the country began in March after crossing the border from Guinea.

While new cases of Ebola appear to be slowing in urban sites of Liberia, additional incidents have spread to rural areas, like the town of Jenewonde near the Western border. A doctor in Sierra Leone recently became ill with the disease after treating sick patients. As a U.S. resident, Dr. Martin Salia was transferred to the U.S for treatment and is currently being reported in critical condition at a hospital in Omaha, Nebraska. Two deaths have also been reported in Mali, a northern African country. The WHO said it was only a matter of time before additional cases were imported to other countries. In the last four years, they have treated two cases per year compared to the current outbreak of one to two new cases per week

With a new team in place, President Sirleaf said she fully expects to accomplish her goal of eradicating the spread of Ebola by the end of the year. She confirmed that the new appointments were necessary to ensure officials are “understanding of the prevailing challenges.” She said in the future, she will “not hesitate to change anyone who fails to meet our expectations.”