By Robert Masucci on November 9, 20143 Comments 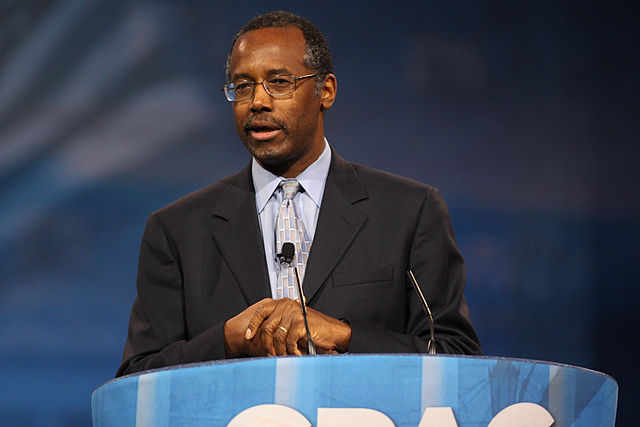 Doctor Benjamin Carson, better known by his legendary pen name Gifted Hands, believes he may have the cure for America. Carson is running for President of The United States in the 2016 election. Running under the Republican Party, Dr. Carson may join the ballot alongside other popular Republican Conservatives, such as Rand Paul and Ted Cruz. In previous interviews, Dr. Carson stated that he had no intention of running for office, but that he would not rule it out. As a man of God, Dr. Carson put his faith in the Lord to decide if running for President was the right move for him and his country. After careful consideration, he broke the news with his campaign ad: “America Needs Strong Medicine: Dr. Ben Carson for President 2016.”

In his early years, Carson was a child of hard times. His father had left him and his brother, Curtis, to be raised alone by their mother, Sonya. It was not easy for a young African American woman, in the late 1950s, to raise two children alone. Sonya had married at the age of 13 and was one of 24 children in her family.

Despite her circumstances, she was a strong woman and believed that if something went wrong in a person’s life, they only had themselves to blame. She would often quote one of her favorite poems by Mayme White Miller, Your Self To Blame. She also put her faith in the Lord to give her the strength to raise two children on her own even with her lack of education.

After working several jobs, Sonya had little time to help her children with their schoolwork. When she saw that they were doing poorly in school, she feared they would become another black stereotype due to a broken home. Sonya decided to take action by forcing her children to cut back on watching television and spend more time reading books. She demanded that her children go to the library and read two books per week, and then submit a written book report to her by the end of each week. Although she was often criticized for her parenting approach, she refused to falter.

Pretty soon Benjamin’s grades began to rise and he went from having the lowest grades to having the highest grades in his class. Benjamin eventually realized his mother’s plan and understood why she chose to disrupt their lives with this experiment, especially since she herself could not read well. He eventually obtained a passion for learning and continued to educate himself. After a religious experience at his Seventh-Day Adventist Church, Benjamin had decided he wanted to be a doctor at only eight years old.

In 1969, Benjamin was accepted into Yale University where he eventually met his wife, Lacena Rustin, who remain married to this very day. He moved on to study Medicine at The University of Michigan. After graduating, he and his wife moved to Baltimore, Maryland, where he became a resident of Neurosurgery at the prestigious Johns Hopkins University. Carson’s gifted hands were evident early on in his career when he successfully performed his first surgery while still a resident at Johns Hopkins.

Over the course of his career, Dr. Carson took on very complicated surgeries that no other doctor would at that time, using unusual methods to cure patients and eventually earning his name Gifted Hands. Even after his wife’s miscarriage, Dr. Carson continued to put his faith in God and attempted to make medical history with his unprecedented miracle surgeries. It wasn’t long before he became the Chief of Pediatric Neurosurgery at Johns Hopkins. In 1985, Dr. Carson proved how his gifted hands guided the way, after being the first doctor to ever successfully complete a Hemispherectemy, the removal of an entire hemisphere of a human brain, allowing his patient to survive the surgery with zero brain damage.

Carson is also known for being the first Neurosurgeon to successfully complete a Craniopagus, the separation of Siamese twins from the head, allowing both children to survive with no brain damage. He did so by solving the problem of exsanguination, by using a surgical technique from a different type of surgery. Over the course of his career, he has successfully performed that surgery on several other patients.

Pretty soon Dr. Carson’s accomplishments were known all around the world after he released his book Gifted Hands: The Ben Carson Story, which captured his success in the medical industry. Due to the popularity of his book, he was approached about turning Gifted Hands into a documentary that gained some amount of fame. He was eventually offered a movie deal, where Cuba Gooding Jr. played him in the popular Hollywood film Gifted Hands: The Benjamin Carson Story. After all of his success he became a world-renowned Neurosurgeon.

Despite his ever-growing fame, Gifted Hands Carson continues to remain humble and giving as he and his wife operate the Carson’s Scholarship Fund, for students who cannot afford college but maintain high grades and help out others. When he spoke at the National Prayer Breakfast in 2013, he told of his upbringing and referenced his idol, Jesus Christ, while using parables to astound the audience with his amazing life story.

After retiring from the Medical Industry, Dr. Carson decided to take his wealth of knowledge and share it with the world by running for President of The United States. Dr. Carson has made it his focus to show how sensible and rational his thought process is with some believing that he may be the most suitable man for the most important job in the world. His upcoming 40-minute campaign documentary A Breath of Fresh Air: A New Prescription for America, is set to be released as a television special.

In 2016, Dr. Carson promises to restore doctors to The White House, much the way it was during the birth of America. Gifted Hands, offers his cure for America, with hope that the public will view him as the rational approach to government, with a genuine care for others and the trust of a doctor. If Dr. Carson wins in 2016, some believe that change will have finally come to America.