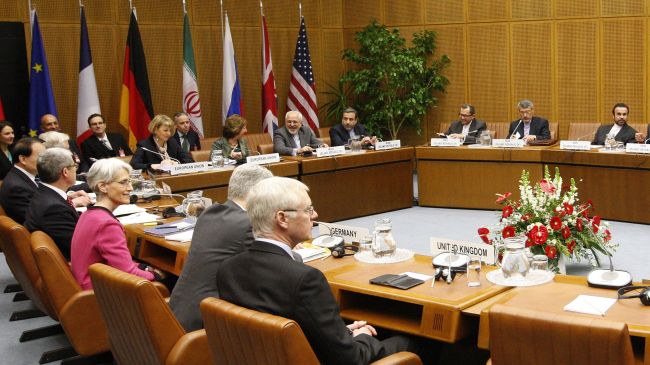 The Iran nuclear talks with the P5+1 powers hit a pivotal crossroad this week, as US Secretary of State John Kerry and his EU counterparts try to reach a historic deal with Iran in the Vienna Meetings. To simply put it, a deal if reached shall make Iran a Nuclear Islamic Republic from an Islamic Republic officially. In all seriousness, nuclear Islamic Iran is a cynical combination of theocracy and nuclear weapons that would one day lead to a thermonuclear war of monstrous proportions. President Obama recently wrote a letter to Tehran stating his objections to their uranium enrichment increases once the sanctions are slashed. But, the President and the EU powers have failed to bring on board an ally and a democratic Asian regional power as an interlocutor in the Iran talks. India.

How would India’s presence in the talks benefit the United States and the West? – India has historic ties with Persia that dates back to the thirteenth century and it is home to the largest Parsi community outside of Iran. Even after voting against a UN resolution for nuclear Iran, India has continually maintained friendly relationship with the Persians. India is also the second largest importer of Oil from Persia as well as a democratic ally to the United States and the European Union which means, it could have been a very efficient interlocutor in the nuclear negotiations this week.

Iran’s economy largely depends on oil exports and with the fall of oil prices in recent months, its second largest oil buyer India has become much more important. India rang a warning shot to Persian and other middle eastern oil suppliers this September that it wants to diversify oil imports by cutting Iranian crude oil imports by 12.5 percent and facilitating its crude oil needs from trades with Africa and Latin America.

India has also expressed interest to import oil from the United States. President Obama and his foreign policy team failed to recognize an important ally that would have helped the United States and the West powers to get a better bargain with Iran over nukes than what they could get now.

Is it a lack of foreign policy vision by India and its rock star Prime Minister? – Indeed. India’s new elected Prime Minister Narendra Modi had an attention catching first visit to America this September making him a rock star in the global community. The Indian Prime Minister had joint meetings with President Obama on an array of mutual needs and concerns including terrorism, science, energy security and space partnerships. But, it is an absolute lack of foreign policy vision on the part of Indian Prime Minister Modi not to engage United States on India’s capability to play interlocutor in the Iran nuclear talks.

In the process, India lost a salient opportunity to enhance comprehensive defense and energy ties with America that would have been a slap-in-the-face response to the Chinese and Pakistanis over the long looming border treats. It is a strategic failure on the part of both United States and India to leave an Iranian vulnerability on the table.

When the U.S. can have Nuclear Weapons, why can’t Iran? – This preposterous question is raised often in the secular world by half-baked liberals and other fascist fifth column types, just like the ludicrous claim they also tend to make that, if the west were not there in the middle-east then Jihadist would not have been there. Completely frivolous and untrue argument. One should learn to differentiate, just like in the case Sherlock Holmes and Professor Moriarty. If one focused on middle east in the past few decades, it is clear to one’s mind that Iran has failed to comply with every code of international law and that the mullahs have a dubious record when it comes to peace and governance.

It has repeatedly lied to the International Atomic Energy Agency and the United Nations about its uranium enrichment program for nukes. Breeding many a foreign goon in its land is not new to the mullahs and Persia also happens to be the chief client of Hezbollah, whose menace in Lebanon and other Iranian enemy lands is well-known. Iranian leaders aspirations of building weapons of mass destruction (WMDs) should be stopped majorly because there are very high odds of Hezbollah and other fanatic groups getting hold of these weapons at the near-end of the Khomeini rule. Think about how  that would feel like.

What about Iran and Iranian? – Persians had a marvelous cultural heritage before they were converted to Islam by muslim invasions. It still retained its ancient language Farsi and follow a different stream of Islamic ideology known as Shia unlike the Sunni form of its Arab neighbors. Persians have fought many revolutions to become free people again, the vast outbreak that finally ended the Shah monarchy in 1979 was thought by many Persians as the ticket to freedom but, the new supreme leader Ayatollah Khomeini planned otherwise. He created a theocratic totalitarian regime with his own doctrine known as Valiyet-e-Faqhi and a public policing unit aka the mullah’s army called revolutionary guards to dictate society.

But, in recent years the Persian populations has become much more pro-democratic and pro-western as majority of the people happen to be below the age of twenty-five, a fact that is not going well with the mullahs in Tehran. If the global secular forces happen to curtail the fascist mullahs from obtaining enough uranium content to make nuclear weapons till a major internal democratic revolution succeeds in Iran, Persia and the world would be a much peaceful place in the near future.

2. Institute of Defence Studies and Analyses