War of Images, Images of War at Getty 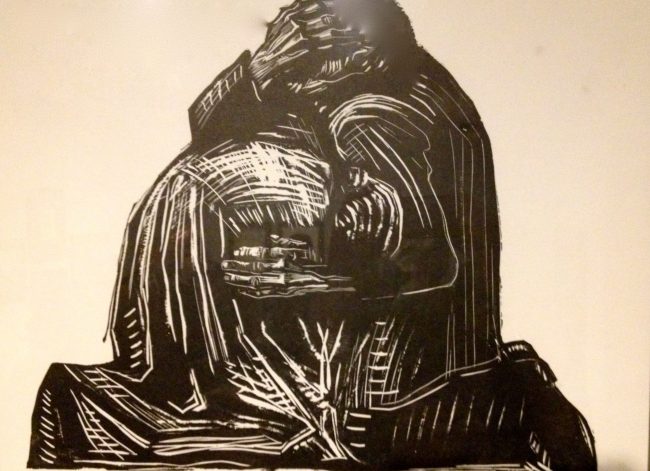 One hundred years ago this month, trenches were dug along the Western Front as the Great War (of weapons and words) that began that August escalated into an unprecedented slaughter and struggle for the future of Europe that involved people throughout the world. The Gerry Center opens a new exhibit, World War I: War of Images, Images of War, on Tuesday, Nov. 18 that looks at the artwork and cultural impact of that war.

Even from the distance of an intervening century, the incendiary propaganda employed to sway public opinion and support for the war; depiction of the gruesome reality of the trenches, tanks, and gas used; and anguished aftermath of damaged cities, fields, families and men are jarring. The exhibition starts with a timeline of WWI and then walks visitors through the art renditions of each period.

The Getty assembled 150 art objects from France, Germany, Russia, Italy, the U.S. and other affected countries. They reflect a wide spectrum of media from satirical cartoons in publications to photographs to woodcuts and sketches. There is even “trench art” created by bored or traumatized soldiers.

The exhibit’s first section looks at the War of Images and jingoistic art used by countries and media to vilify the enemy and reflect their self-professed cultural superiority. The countries involved developed inventive propaganda that used the enemies’ own patriotic symbols, such as Uncle Sam, the Russian bear andFrench classicism, and turned them into brilliant caricatures depicting German barbarism, French decadence, British imperialism and Russian cowardice, according to Getty exhibit curator Nancy Perloff. Examples include a French publication, Le Mot, portraying German Kaiser Wilhelm as a cartoonish jack-in-the-box toy and a German publication, Simplicissimus, showing an English soldier sliding off a blood-covered globe that represents their rule over the British empire.

The second part of the Getty exhibit relates the reality of the brutal war with its massive casualties. It includes the war diary of Italian Futurist painter and sculptor Umberto Boccioni, who died after being trampled during a cavalry exercise in 1916. Besides his artwork, he left behind a diary that provides a detailed account of fear and doubt in the heat of battle.

The section also includes wood cuts that show the horrors of the barred wire no-man’s lands between trenches as well as explosions and gas attacks. There is a griping photo blown up from the Battle of Verdun in 1916.

Aftermath, the final section, looks at the end of the war and the physical and mental trauma left behind. Works by Max Beckmann, Otto Dix, and George Grosz and Fernand Léger illustrate their experiences. Haunting, stark woodcuts by German Käthe Kollwitz reflect her anguish after her son died in the war with works she created of grieving parents, an anguished wife grasping a small child. As one exits the exhibit, there is a giant photo that shows Verdun nearly 100 years later and the fact that remnants of trenches still scar the landscape.

Located on the West side of Los Angeles, the Getty Center is open from 10 a.m. to 5:30 p.m. on Tuesdays through Fridays as well as Sundays. The museum is open on Saturdays from 10 a.m. to 9 p.m. It is closed on Mondays and most holidays. The WWI exhibit depicting a War of Images, Images of War will be on display at the Getty until Apr. 19, 2015.