‘Longmire’ Back in the Saddle on Netflix 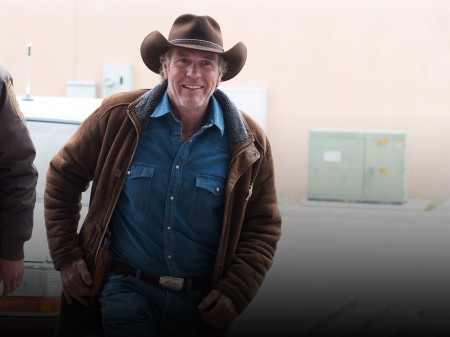 Back in August 2014, A&E Network announced to an outraged fanbase that they were cancelling Longmire, a show that consistently pulled in viewing figures of around 5.6 million each week but Netflix has said that the cowboy detective is back in the saddle and they don’t care how old the demographic is that watches the show. The Arts and Entertainment channel stated that they were “cleaning house” and getting rid of shows not produced by them. The truth was that the viewing audience were too old for the network.

The original home of Longmire has a targeted demographic of 18 to 49 and the fact is that the mystery show had viewers around 60 years of age. Since television works around advertisers who sponsor and support networks and viceversa. Since the targeted audience was not being catered to, despite the show being a clear hit, A&E cancelled the series after season three ended on a cliffhanger where Walt Longmire had started off to catch the person who murdered his wife.

Starring Australian actor Robert Taylor, Katee Sackhoff and Lou Diamond Phillips, Longmire is based on the books by Craig Johnson and set in Wyoming. The show and the books have dealt heavily with Native American issues, traditions and their interaction with the community. The series was shot in New Mexico and fans did not seem to mind the disparity in location. Before the cowboy cop was put back in the investigative saddle by Netflix fans took to the Internet to express their disappointment and outrage.

At least one star of the show expressed his disgust at the decision by A&E to cancel the Warner Horizon Television produced series. Lou Diamond Phillips who got onto his account to tweet that the Arts and Entertainment channel may want to rethink their name. The network maintained publicly that the reason the show was axed was down to the fact that they wanted more control over the programs that they aired. It was pointed out by outside agencies that A&E were cutting down on all the scripted shows on their channel, mainly because of cost. Reality shows are much cheaper to produce and the number of reality TV shows versus scripted proves there may be some validity to that claim.

Warner Horizon Television did not take the cancellation of Longmire setting down, the production company immediately began looking for another network to take over airing their hit show. Cindy Holland, the vice president of original content for Netflix pointed out, in their official announcement that they would be taking over airing the show, something that the older fanbase knew already, that the cowboy mystery cop show consistently delivered unique and great television.

According to The Washington Post, the fourth season, that fans were doomed to never see, will pick right up where that cliffhanging season three finale of Longmire ended. It has been rumored that the Wyoming lawman will finally learn who killed his wife. It has also been reported that all the main players, Taylor, Sackhoff, and Phillips, have put pen to paper and signed contracts for the next season of 10 episodes ordered by Netflix. The cop who works to solve crimes on and off the reservation is back in the saddle again, and this time it does not matter how old the fanbase is.

3 Responses to "‘Longmire’ Back in the Saddle on Netflix"