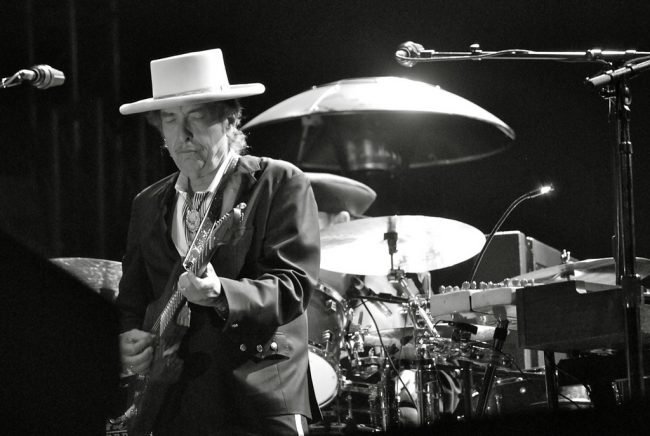 While 2014 was fruitful for many musicians, folk legend Bob Dylan had one of his best in quite a long time. In the modern musical scene, acts move at lightning pace, touring and releasing constant content. With that said, most acts who maintain that rigorous schedule are youthful and untouched by serious longevity in the industry. In fact, longevity in music is becoming even less common in a culture that strives for the single instead of the album, the culture that streams for free and moves through a dozen artists in half as many minutes. So when one of the most successful musicians of the year is Bob Dylan, a 73 year-old folk legend, that is indeed unusual.

Typically bands release an album once every year or two and tour for short spurts during the year. Dylan, however, tours for almost the entire year, and covered a pretty hefty chunk of the globe in 2014. At 73, the musician spends more time on the road than people a third his age. These performances were consistently hailed by critics this year, largely because his voice showed recognizable improvement over recent years. Though the set lists were not overly varied, they were consistently praised the whole year.

Bob Dylan did much more than tour this year, too. Back in March, ATO Records grabbed a bunch of top-tier indie rock artists and crafted Bob Dylan in the 80’s, Volume One. The record challenged the musical stigma that the 1980’s were one giant rough patch for Dylan by proving that some of his most well written songs are rooted in the period. Dylan’s Gospel was released in April, which was a lost gospel album recorded in 1969 utilizing some of the songwriter’s best content. Finally, Elvis Costello, Marcus Mumford, and others worked together to put out Lost on the River, The New Basement Tapes. Lost on the River consisted of interpretations of Basement Tape-era content which never made it to the reel.

2014 was not just Bob Dylan’s best year in a long time because of the three homage records, though, it was excellent as a result of many other outings. In March, Columbia Records re-released the Bob Dylan 30th Anniversary album. They remastered the concert, added some hidden tracks from rehearsals, and tracked down the film from the concert and remastered it to Blu-Ray. The concert is one of the single most important musical gatherings of the 1990’s, combining legendary artists on one stage to culminate a collection of recordings under one banner: Bob Dylan.

In November, Dylan released the next piece of his archival Bootleg Series which gathered every recording from the famous Basement Tape sessions in one set. Spanning well over 100 songs, the set catalogs one of the most significant recording sessions of the 1960’s. The Basement Tape sessions would go on to alter musical history forever, permanently changing the way musicians addressed the production of music and the way fans consumed it. Dylan’s camp also got together this fall to put out a giant 14-pound book of every published song in his repertoire.

2014 was undoubtedly a strong year for Bob Dylan, one of his best in a long time. Back in May he released Full Moon & Empty Arms on his website with no further explanation. The Sinatra cover sparked a debate as to whether or not Dylan was eluding to a new record. The Bootleg Series release in November finally put the rumors to rest, it is an album, and it is coming in February. That is certainly one hefty year for a 73-year-old man who just will not quit.