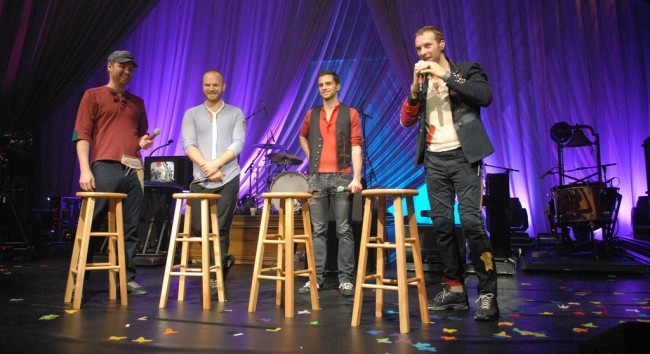 Chris Martin from Coldplay has likened the band’s next album to Harry Potter. The lead singer says that the album A Head Full of Dreams may be the last album for the band. However, nothing has yet been confirmed.

Martin was talking to BBC Radio 1 about Coldplay’s most current album Ghost Stories, which is the sixth studio album. He mentioned that they were already working on the seventh album, and broke the news to fans within the interview. However, he has not ruled out releasing an album years down the line. For now it seems the band wants to part ways and focus on their own things.

The frontman has been in the news a lot lately due to his personal life. He and Gwyneth Paltrow split up earlier this year after 10 years of marriage. They made headlines after calling their divorce “unconscious coupling” to avoid the stigma that the term divorce brings. There were reports that they may be getting back together until Martin started dating The Hunger Games actress Jennifer Lawrence. That relationship has now allegedly come to an end.

The Coldplay singer likened the next album to Harry Potter, due to it being the seventh album. The book series had seven published novels until J.K. Rowling brought the story to an end. However, she has not finished with the universe and regularly publishes updates on her website Pottermore. It leaves the door open for the band to bring out more years down the line.

For Martin, it is important to think of the seventh album as the last. He wants to make sure everything goes into it, which may not happen if they think there is one more to come afterwards. However, he is not locking the door on future albums. This is something that other bands have done, only to end up getting back together. The Rolling Stones have done numerous final tours, leading to many to wonder whether they will ever stop.

During the interview, the Yellow singer announced that there will be a tour with A Head Full of Dreams. This is something that fans have missed with Ghost Stories. The band seemed to decide to get straight back into the studio to work on their next album, despite the success of their sixth. It seems that Ghost Stories was too personal to do a full tour with it. The lead singer said that it was great to be able to get straight back in the studio.

Martin acknowledged that he was nervous about confirming the information in the interview. Coldplay had not discussed speaking about it, but he wanted to because it was Radio 1. He spoke about how the seventh album was the “completion of something.” He did hint that the sound on the album would be different to the previous album.

Magic, which was the first single released from their most recent album, made it to the number one spot of Radio 1’s top 100 songs for 2014. It beat the likes of Eminem, Slipknot and Hozier. While thanking fans who voted for his song, Martin likened Coldplay’s next album to Harry Potter by announcing that it could be the last album from the band.