By Tricia Manalansan on December 27, 20142 Comments 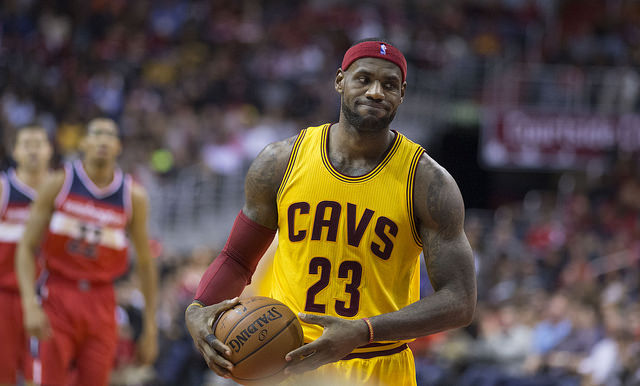 Many NBA fans recall LeBron James’ return to Cleveland as a member of the Miami Heat a few seasons back as being less than welcoming. Yet James’ Christmas return to Miami as a Cleveland Cavalier was not the anticipated deja vu, as the crowd rose to their feet and applauded their former town favorite. This welcoming crowd, who still had lingering fans with their LBJ jerseys on, was not enough for James and the Cleveland Cavaliers to pull a win in Miami. The Miami Heat won the game 101-91 and managed to spoil LeBron James’ Christmas return.

In addition to Miami’s crowd cheering as James walked onto the court for the first time since leaving Miami as an opponent, he was also welcomed by his former teammate and good friend, Dwyane Wade. The two players gave each other a pregame hug, sat and briefly chatted on the sideline during halftime, and also hugged one more time as the game ended. James and Wade were always considered to be one of the NBA’s top duos during their years together, and many fans are aware of the friendship that has evolved off the court. Clearly, as this was the first game playing against each other since 2010, they have shown that their friendship is bigger than basketball. In the end though, they have become opponents playing against each other, and only one of them was able to celebrate a Christmas Day win.

The Cleveland Cavaliers, now 17-11, had the better record over the Heat, not to mention that Miami is 6-10 at home this season. Many would have predicted that the Cavs would have beat the Heat in the NBA Christmas Day special, but the Heat managed to spoil that prediction also. The Miami Heat was up by as much as 17-points. The Cavs found a way to catch up and cut that lead. James managed to score a breakaway dunk to put the Cavs up 78-77, but was called for a technical foul for hanging on the rim a little too long. That lead was taken away immediately as Wade scored for the technical. After that, it took until the final minutes for the Heat to have a secure lead as they went on to winning by ten points.

James and Wade were neck-and-neck as far as their own individual stats to make the game that much more exciting. Wade scored 24 of his 31 points just in the first half, with a total of five rebounds and five assists. LBJ finished with 30 points in his 40 minutes with four rebounds and eight assists. Chris Bosh, who was the third player in Miami’s previous “Big Three” witnessed the brother-rivalry game from the sidelines as he is still suffering from a calf injury. Cavaliers’ Kyrie Irving scored 25 points and Kevin Love scored 14 points. Miami’s Luol Deng also put up 25 points, while Chris Anderson finished with 12.

The Miami Heat record improved to 14-16 after their Christmas Day win against the Cavaliers. The Cavs may have lost more than just that game though as they have officially announced that one of their players will not be out for the season due to injury. Cavs longtime veteran, Anderson Varejao, tore his left Achilles this past Tuesday night and is scheduled for surgery. This season-ending injury has put the Cavs in a tough position as they have lost their reliant starting center. LeBron James and another NBA veteran, Shawn Marion, will be up as the Cavs power-forwards. Tristan Thompson and Kevin Love will be given more time as center while also giving more play time to Kyrie Irving.