The Walking Dead: So Long Emily Kinney and Moving On (Trailer) 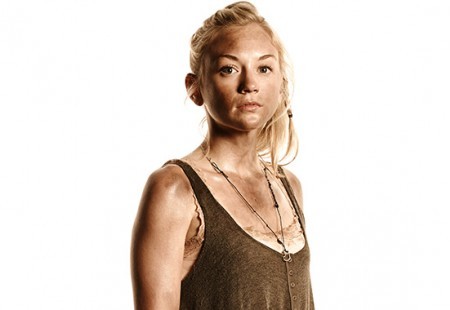 So after a huge build up about the death of a major character in The Walking Dead season five was anyone really surprised that the show would be moving on and saying so long to Emily Kinney as Beth? Hints began back in season four when Beth was taken from Daryl after she gets out of the creepy walking dead filled funeral home in episode 13, Alone, her fate has been in question. Once season five started, it was revealed that she was in a hospital being held captive by the mentally screwed up Officer Dawn. Although to be honest, it looked like the girl was in danger of being beaten to death by the violence prone cop in charge before she was finally dispatched with a bullet to the head after stabbing Lerner with a pair of scissors in Sunday’s episode.

When the mid season finale aired on November 30 social media erupted in an explosion of disbelief and upset at the death of this character. No one, however, appeared to be as upset as the actress herself. On The Talking Dead, the Chris Hardwicke hosted show that airs immediately after each episode, Kinney was a delayed guest on the couch and she was pretty tearful during her interview. According to another interview that the 29 year old actress gave to TVLine, she knew back in August this year that Beth was going to be taking that long dirt nap. Looking at the interview with the website and her chat on Talking Dead, the performer is still pretty upset at Kirkman’s decision to kill her character off.

Saying so long to Emily Kinney as Beth in the mid season finale of The Walking Dead and then moving on, is hard, this young lady has come a long way in the series. Looking at previews up the show’s return in February 2015 it does seem that not everyone in the verse is too successful at putting Beth’s death behind them, things seem to be pretty interesting in the upcoming new year. Fans of the series may be upset about the young Ms. Greene’s death, but in all honesty, it was apparent that Officer Dawn Lerner and Beth would be facing off in the near future and only the world’s biggest optimist would have thought the teen winning had any chance of winning in that battle.

Beth may have toughened up but she still had a long way to go. Now, of course, she will never have the chance to get any stronger. Her character was not in the comic verse so in a way it stood to reason that she would last in the television show. Things do appear to be heading toward the comic world again. As CINEMABLEND have pointed out, it looks like Negen may just be making an appearance in the upcoming second half of season five. And what about Morgan? Will he wind up reuniting with Grimes before Alexandria, if that is the group’s next destination.

Certainly the presence of Father Gabriel is a signpost that things will be mimicking the literary source material of the show. Since, he is part of the Alexandria Safe-Zone storyline in Kirkman’s verse as is Negen, the world’s biggest big bad could just show up very soon.. The preview shows Rick Grimes and his group of survivors, which now includes Noah and the disgraced Eugene, encountering a load of the walking dead and learning of a new “safe haven.” It does seem that this haven could be Alexandria, although that could be their destination by the end of season five which means that Negen may not show up till season six. Until then, The Walking Dead could focus on Daryl saying so long to Emily Kinney’s character Beth and his struggle to move on from her death and killing her killer. As the actress points out in her TVLine interview, these two got pretty close and Dixon may take some time to get over this latest turn of events. Here is the preview trailer for the 2015 return of TWD.