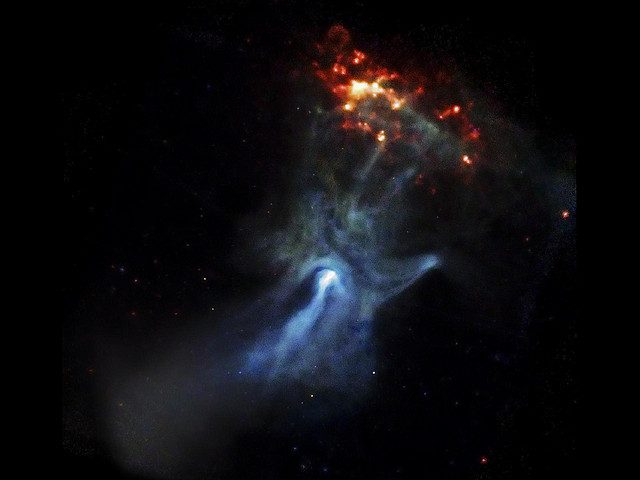 New photos have been captured of the stunning “Hand of God” nebula. Known as CG4 to astronomers, the Hand of God nebula is a cometary globule nebula. One of its distinctive characteristics is that one side has been wafted outwards into a long tail which resembles the burning tail of a common comet. The tail of the Hand of God and other globules in the area were caused by the Vela supernova which blew them into the irregular shapes.

The name cometary globule does not refer to what some may think – they have nothing to do with comets. A cometary globule nebula is a type of nebula. This nebula stems from a Bok globule. A Bok globule is known as a very dense, very compact, and very cold nebula. These stellar bodies are the smallest known type of dark nebulae. The Hand of God nebula and other similar to it are only one or two light-years across. The nucleus of the nebula can vary between two and one hundred solar masses.

Usually, the nebula is very faint. It is 1,300 light-years beyond Earth, located in the Puppis Constellation. The reason why astronomers can detect and capture great photos of this nebula is because it is illuminated by other stars in the background and the remnant of the Vela supernova.

The Hand of God nebula and other nebulae of the same type are very hard to detect. Since they are considered dark nebulae, they emanate no light and only appear as small, dark sections in the sky. Though, since they are considered cold on the stellar temperature spectrum, that does not mean they are dead masses. Even some of the coldest bodies in the Universe have a warm, radiating core that has the ability to give birth to one or multiple stars.

The new photo was captured by the monstrous telescope at the European Southern Observatory. This is the first time astronomers were able to see nearly minute details of the Hand of God. They stated that the head of the globule resembles a yawning divide for a mouth. They were also able to determine that the mouth is 1.5 light-years across and the tail of the globule trails to eight light-years behind.

Hongjun An, an astronomer at the McGill University in Montreal, Canada, stated that he and other astronomers are still guessing whether or not the “hand” part of the nebula is an optical illusion. This was voiced in a statement from the Nuclear Spectroscopic Telescope Array (NuSTAR). They also discovered that the star in the middle has a diameter of only 12 miles and spins at a velocity of seven times per second.

Astronomers stated that although the head of CG4, or the Hand of God, is glowing, that does not mean it is self-illuminating. Rather, as was mentioned before, it is illuminated by the presence of other stars in the area. Even though radiation from the nearby stars will eventually erode the nebula into nothing, astronomers say that the nebula is still a ripe, well-functioning stellar nursery – forming brand new stars from a dark depth.

Though its origins remain unknown, the distant nebula is said to be one of the most mysterious, yet beautiful, of the Universe’s nebulae. As the astronomy community stumbles upon new technologies and creates bigger and better telescopes, even more revealing photos may be captured of the Hand of God nebula in the future.