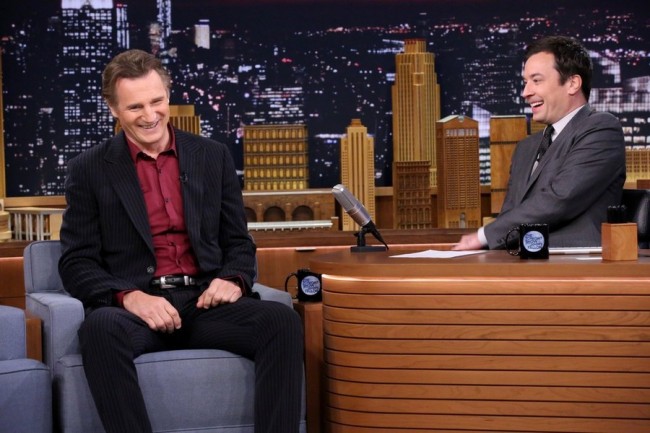 During his monologue, Jimmy Fallon joked about President Obama meeting with the President of Mexico. He said that Obama thought he was being referred to when the president of Mexico was asked how hard it was to “govern 100 million Mexicans.” Fallon said that President Obama answered the question, saying “it can be challenging.” He then joked about Biden “being the reason Obama got elected both times,” and about some Congressmen supposedly liking to “swim naked” in the Congressional pool.

Fallon made a couple of jokes about the upcoming Coachella musical lineup, and a man in Mexico who thought he had won the lottery, but “his ticket had been misprinted.” He announced some upcoming guests, and then said Liam Neeson and the creators of Portlandia will be there, Fred Armisen and Carrie Brownstein, and a comedian from England, Simon Amstell. 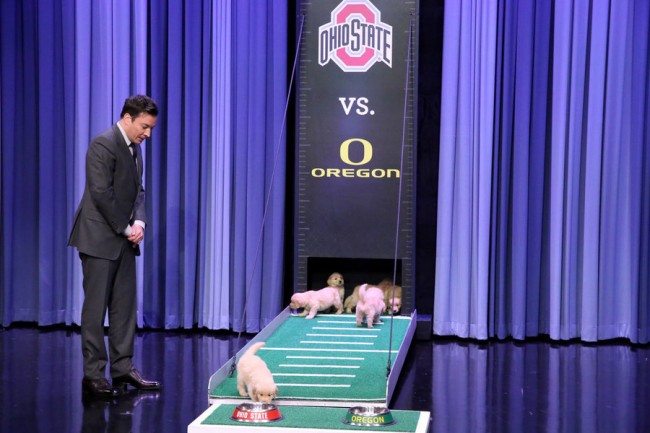 After that, Jimmy Fallon had puppies race towards bowls of Kibble. He said that whichever bowl wound up with the most puppies eating from it would signify which college football team will win the national championship. He named the dogs with the names of some of the football players who will be playing. The puppies did not seem that interested in eating. One of the puppies urinated in one of the bowls. Two of the puppies, finally, were eating from the Oregon Ducks bowl, and that was enough for Jimmy Fallon to declare that the puppies predicted that the Oregon Ducks would win.

When the Tonight Show came back from a commercial break, host Jimmy Fallon introduced his first guest, who stars in Taken 3, which opens this Friday, actor Liam Neeson. “You’re a stud! You’re the greatest!” Fallon said.

Liam admitted that he did not get a drivers license until he was in his 30s. He related that he had gotten into a bad motorcycle crash going just 26 miles an hour, when he ran into a deer.

“Jimmy, I did everything wrong,” he said. He hit a tree after he had hit the deer, and he said that “the bike broke into two.” The paramedics came, and Liam said he had on “a beautiful Harley Davidson leather jacket that Steven Spielberg gave me.” The paramedics cut it off of him. He said he still has the two halves of the jacket to show his sons, to serve as a warning about what can happen while riding motorcycles.

Jimmy Fallon and Liam talked about the movie Taken 3, which comes out this weekend. Fallon showed a clip from the movie, one where Liam is speaking to someone on a cell phone, saying “I’m sure by now you know who I am and what I’m capable of.” 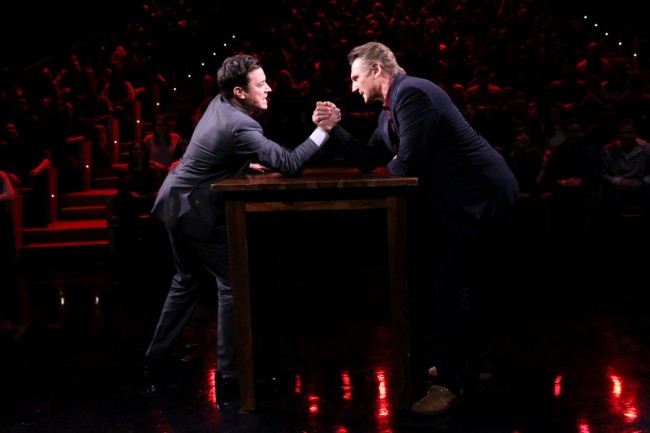 After a commercial break, the Tonight Show returned and Jimmy Fallon challenged Liam Neeson to an arm wrestling contest. Fallon told Liam “I’ve been working out a lot lately.”

The arm wrestling contest was on! Fallon and Liam made jokes about the things that each of them would do “after I win.” The comments were pretty hilarious, like Liam’s saying he would borrow Fallon’s car and return it saying that “there’s a leak in your gas tank.” But, it would not be because the tank was leaking gas, but because Liam “had taken a leak in it.” After they both traded witticisms for a while, Liam easily defeated Fallon. 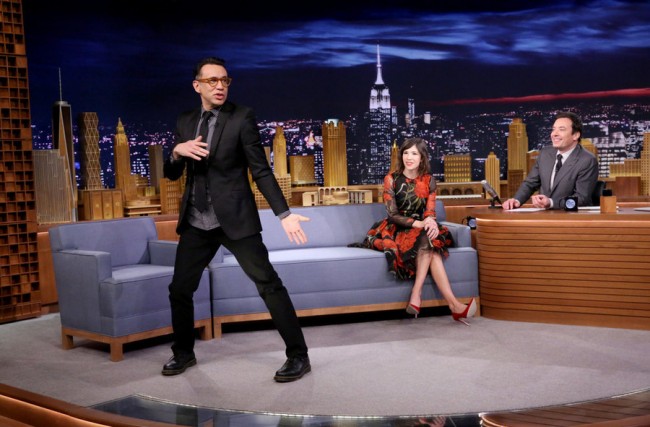 When Fred Armisen and Carrie Brownstein were then introduced by Fallon, Fred related how he had first met Carrie. Carrie said “It’s a little weird when you meet someone and they have a button with your face on it.” Fred had been wearing a button with Carrie’s face on it, as she was in a band he had gone to see. He had not known, beforehand, that he would be meeting her that night, though.

Jimmy Fallon talked to them about Portlandia, and Fallon said it was one of his favorite shows. Then, Jimmy Fallon showed a clip from Portlandia about a dance-off at a nightclub. 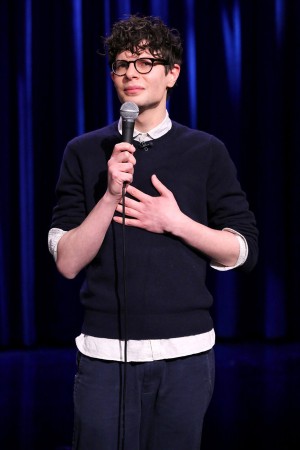 When The Tonight Show Starring Jimmy Fallon came back from another commercial break, Fallon introduced comedian Simon Amstell. Simon was there to kick off his new tour, “To Be Free.” He said “I love America. Every time I come here, I feel welcome and safe. You guys really know how to treat white people.”

Simon joked about the Queen of England, and how she does not seem to be embarrassed by anything. “I think I preferred her when people thought she murdered Diana. Mixed reaction,” Simon said when there was just scattered applause. He added “Some of you people are right.”

“I can’t believe that we still have sexism,” Simon continued. “First of all, there are so many women. Also, we all come from the same place. Do we say in the womb, ‘I think my dad could do a better job?'”

He said that he “did not know how there could still be homophobia, when Elton John wrote The Lion King.” He said that the message of The Beatles was so simple, “All you need is love.” Still, the message has not seemed to have gotten through to a lot of people.

The Tonight Show was great tonight, with guests Liam Neeson from Taken 3 there to promote his upcoming movie and compete in a sort of combination taunting and arm wrestling competition. Fred Armisen and Carrie Brownstein are both very funny and they provided quite a few laughs as they talked about Portlandia and other topics. Then, comedian Simon Amstell concluded the Tonight Show with a LOL comedy routine.