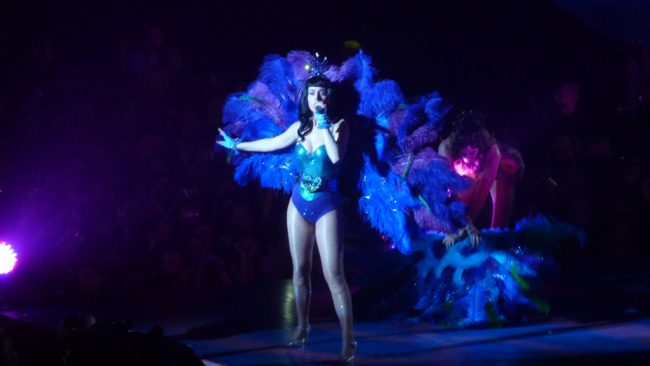 Some of the details for Katy Perry’s Super Bowl halftime show have been shared. However, the finer details have not been announced. There are many excited to see the singer take the stage for the 12 minute performance.

The halftime show is the biggest part of the Super Bowl for many. Last year, Bruno Mars saved the football event due to a poor performance on the pitch. This year, there is hope the game between the Seattle Seahawks and the New England Patriots will be much better, so as much pressure is not put on Perry.

Ricky Kirshner is the executive producer for the Super Bowl halftime show again. This will mark his eighth year of producing it, and he admitted that there are five things that go wrong each year at the end. Most people will never realize that anything goes wrong, but there have also been unpredictable challenges that have been noticeable over the years. Inclement weather has been one of the biggest issues, but loose cables have also caused problems in the past.

Very few of the details about Perry’s Super Bowl halftime show have been shared. Kirshner says that he does not want to ruin too much for the viewers. However, the Fireworks singer will be entering and leaving the stage in a very different way to other artists before her. There is much more happening on the stage and field this year compared to many other acts.

Last year, Mars kept his performance to the stage. A few years before that, The Black Eyed Peas took over the whole field for the band’s performance. From Kirschner’s words, it seems like Perry will be taking a leaf out of the latter’s books.

Hamish Hamilton, the show’s television director, also confirmed that there would be a very different look and feel to each song on the stage. He said that this was a “brand-new collaboration,” soundtrack and show; something that Perry’s audience has never seen before.

For the last year, both Kirschner and Hamilton have developed ideas for the stage. They decided on the best artists for the job and planned the design once Perry was confirmed as the lead artists. There are now 500 people helping with various aspects of the Super Bowl halftime show, whether it is setting up, getting the perfect camera angles, or helping with backstage. It is important to make sure everything runs smoothly.

According to reports, the team only has eight minutes to make sure the stage is set up. The strict timeline means that everyone must be in place just right. It requires hours of rehearsals to get everything ready. There is an emergency plan in place for when things go wrong, but most of the time the team has to work together when something unexpected happens. Experience and good fortune all help to keep the halftime show running as smoothly as possible.

The two in charge have commended Perry, and said that she has been great in helping with the development of the show. She knows what she wants, her music and her audience. She is smart and is reportedly “nice” to everyone around. That helps them create the perfect halftime show. While the finer details of Perry’s Super Bowl halftime show have not been announced, it is expected to be an exciting performance.