Star Wars Knights of the Old Republic on iOS and Android 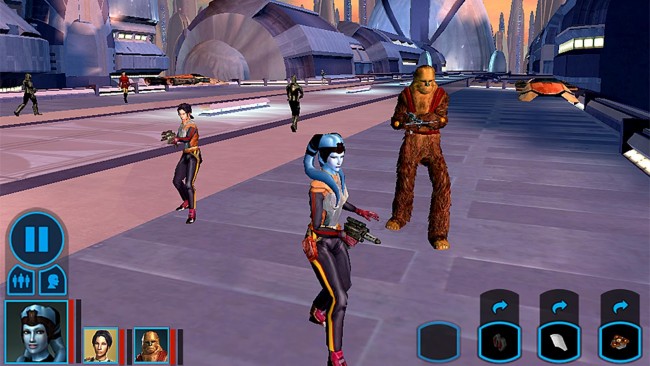 Star Wars is one of the most revered franchises in history, with tons upon tons of media outlets featuring the galaxy far, far away created by filmmaker George Lucas. One piece in particular that made a very powerful mark on the video game industry and still seems to be going strong more than a decade after its release is that of the Star Wars: Knights of the Old Republic series.

The original Knights of the Old Republic or KOTOR title was released as an exclusive title for Microsoft’s original Xbox gaming console in 2003. The game received the Game of the Year award upon its release and received a full-on sequel for the Xbox, Star Wars: Knights of the Old Republic II – The Sith Lords, nearly two years later. The sequel was received well, although its critiques and ratings did not match up to the extreme success of its predecessor.

The original game is still quite relevant, however, as fan boys and girls of the original Star Wars title can now grab ahold of the entire game they played on the Xbox all from the compact comfort of their iOS or Android device. The game is available for a small fee, ranging from $5-$10, on both the Apple iTunes App Store and the Google Play Store. The users of iOS devices were able to get their hands on the mobile version of KOTOR before Android users were, but now the might of the Force is available for all.

The title has been stated as not only one of the most successful Star Wars video games to be made, but one of the best role-playing games (RPG) to ever hit the video game market. The original title actually takes place thousands of years before any of the Star Wars films, hence the title, “Old” Republic. The intricacies of the game are most likely what is responsible for the widespread levels of success. Players take on a fully customizable character that evolves according to the player’s actions within the game. The theme of following paths of the dark and light side of the force play heavily within this Star Wars title as one’s character will have to choose which path they are to take as the game advances.

Light and dark side points are awarded to the player depending on their actions and responses to other individuals in the story. Their actions will also shape the way the story plays out, changing quests and opening or closing doors that would have been presented vice versa if they had made a different choice. This Star Wars title assures that every single game experienced by each individual player will be vastly different.

The game is still rather expansive, as it was initially made for a gaming console, so the larger the device one has, the better experience they are likely to have while playing the mobile version of KOTOR. Users of the iPhone 6 Plus will definitely get a great gaming experience out of the app, but one using a new iPad or Android tablet would most likely have more to gaze at and have an easier time maneuvering their favorite Star Wars characters around the battlefield.

For fans of the galactic phenomenon, they should click on over to the Apple or Google Play store and download their own copy of Star Wars: Knights of the Old Republic. The app is available for iOS and Android devices now.