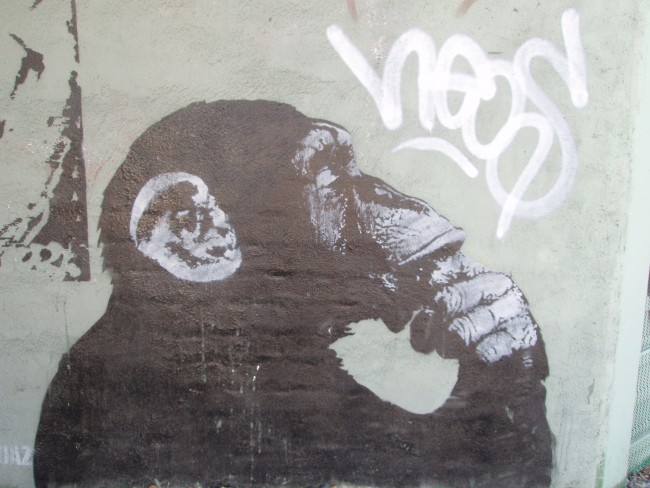 Controversial and mysteriously anonymous graffiti artist Bansky has let his presence be felt in the Gaza Strip. Bansky recently posted a video to his official website with the caption that states, in a fashion akin to that of a tourist advertisement: “Make this year the year YOU discover a new destination.” The video (provided below) shows an individual walking through tunnels and rubble that is the result of the 50 days of battle between the Gaza Strip and Israel last year.

This area is still under tight control by both Egypt and Israel, which made portions of his trip technically illegal for the Briton artist. Some areas are still attacked by the Egyptians as they are continuing to try to create a “buffer zone” between themselves and the Gaza Strip. Israel still maintains roadblocks that would allow supplies such as food and concrete for rebuilding. There has not been any concrete allowed in the Gaza Strip since the conflict last year.

This effort by graffiti artist Bansky to make an outside presence felt in the Gaza Strip comes after Mark Goldring led Oxfam reports on some of the conditions of the impoverished area. Regional Director in the Gaza Strip, Catherine Essoyan, maintains that the longer the restrictions on the area continue, such as the roadblocks, the more lives that are in danger.

Oxfam has reported that over the last six months about 100,000 people have been displaced, living in shelters or with family members. Others live in the rubble without windows or roofs. Essentially, the conditions in the Gaza Strip that these individuals are living in is sub-par and that is what Bansky is trying to bring to light by creating this video and through applying his graffiti art to the ruins.

In Cairo last October there was $5.4 billion pledged to aid in the rebuilding of the Gaza Strip. However, little of these funds have actually made it to the areas in the greatest need. In January, United Nations Relief and Works Agency (UNRWA) made a statement that they would not be able to provide payments to thousands of Palestinians in need due to their lacking international funds. On Thursday $32.2 million was contributed by Japan to the UNRWA of which $14 million will be directly applied to rebuilding houses and rent for those who were left without a home after last years conflict.

Bansky’s graffiti that he left on the Gaza Strip came in numerous forms. He painted the Girl with a Pearl Earing, children playing on a swing set and a huge cartoon kitten. He said that after he painted the kitten a man asked him what it was supposed to mean. He replied by saying that he wanted to come to the Gaza Strip and paint things that people would want to look at on his website, and everyone likes to look at pictures of cute kittens.

Banksy visited the Gaza Strip to draw attention to this impoverished area of the world and to leave a bit of an outside presence on this isolated place. The reason the war raged on last year is not depicted in his images and does not seem to be of great concern to the mysteriously anonymous artist. His purpose for drawing attention to the Gaza Strip can be reflected in his image of the kitten. The children need international aid in order to begin rebuilding this ruinous landscape.