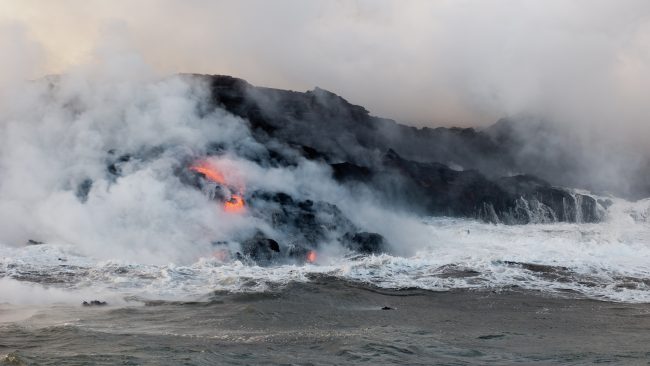 Volcanoes on land expel large amounts of carbon dioxide and scientists have questioned whether this might influence the climate. Only recently has there been a focus on the volcanoes deep within the sea. A new study of the sea-floor volcanoes at mid-ridges, where molten rock emerges finds the activity there corresponds with historical changes in the orbit and environment of the Earth.

Once thought to be slow and steady, while they seem to have regular patterns, actually erupt in bursts that last from two weeks to 100,000 years, according to geophysicist, Maya Tolstoy from Columbia University’s Lamont-Doherty Earth Observatory. It was assumed that the influence of these deep-sea volcanoes was small because they are in steady state, but these eruptions coming from the mid-ocean ridges are affected by both large and small forces. She feels a closer look at their affect is warranted.

Tolstoy’s study aims at the frequency of underwater volcanoes eruptions and what determines them. She found they were linked with changes in how the Earth moves around the sun. These changes, occurring in 100,000 year cycles, cause ice ages and warm periods affecting the rise in sea levels. The underwater eruptions have not been included in determining the factors affecting the climate worldwide.

One aspect that Tolstoy discovered is that the eruptions coincided with low tides. The implication of this discovery could affect the underwater volcanic activity as sea levels rise. With low tides at a higher level in the rising sea, ultimately affecting the climate.

In looking at the history of the sea floor, during ice ages the sea is lower because the ice was formed with water from the sea. During such periods when the sea was low, there was more volcanic activity in the sea.

Researchers have suggested that as icecaps build on land, the pressure on volcanoes builds as well suppressing eruptions. However, when the ice begins to melt eruptions of on land surge. The volcanoes spew carbon dioxide further warming the atmosphere, effectively influencing the climate. With the warming air even more volcano eruptions occur.

Tolstoy found evidence of a 100,000 year cycle in seafloor maps of the Pacific. Large hills of lava formed on the East Pacific Rise when the seal level was low. Less water pressure on the ridge allowed the volcanic activity to increase.