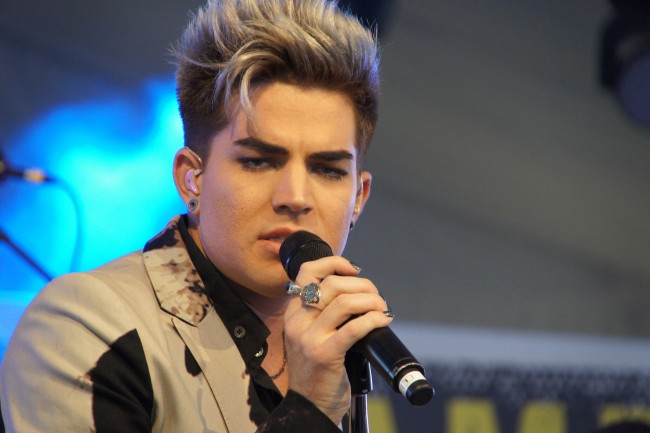 Just in time for the release of a snippet from the first single from his next album, Attitude Magazine has made Adam Lambert their latest cover model. The magazine sat down with the former American Idol, turned sometimes Queen front-man, to discuss music, life, love and even fellow artists. The cover of the magazine reads, Adam Lambert from Idol to Icon, and is set to to hit stands on April 1.

In the issue, Lambert talks about not only his own coming out, but the path that so many other celebrities have had to traverse in order to be true to themselves. One such star mentioned, is Sam Smith. Lambert talks about how Smith has been very open and honest about who he is as a person, and that having met, he finds the singer to be a very lovely individual. The singer also talks about Smith’s music and how relatable his songs are. He described the music as both beautiful and timeless.

Lambert also spoke about other gay artists and the relationship that they all have. He said that his relationship with Smith is one that is more friendly, and like two people who have an understanding with each other. The singer also spoke about meeting both Boy George and Elton John. He believes both veteran musicians are lovely people and even spoke about sitting down to lunch with George. In fact he said that he found George to be interesting to talk to and that they were able to discuss music and many of the things that he has gone through over his long career.

Although the cover story and interview with Lambert and Attitude Magazine included discussions on other artists, many fans want to know more about the singer’s upcoming album and single. Over the past weekend the singer gave fans a taste of what he is working on with a snippet from his upcoming single, Ghost Town. From what can be heard of the song, it appears to be a change of pace for the singer known for his glam-rock style. Instead, the snippet gives the song a feel of being both sleek and also very much a dance track.

Now fans have gotten their very first taste of Lambert’s new musical style, plus while they wait for the release, they can catch up with the singer in his cover story with Attitude Magazine. The story includes an 11 page spread with an interview and photographs of the talented artist. The magazine is scheduled for release on April 1, but fans can get a sneak peak on the magazine’s website.

2 Responses to "Adam Lambert Makes the Cover of Attitude Magazine"