By Chanel van der Woodsen on March 7, 2015No Comment 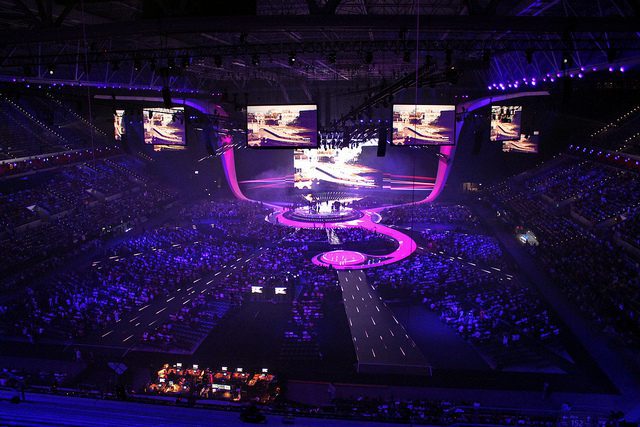 The headliners of Eurovision 2015 are making sure to keep everyone updated with announcements regarding each country’s participation and the song choices of the selected participants in question. Note: This list does not (and nor did the previous update) contain any of the seven countries that are given the Straight to Final status. The following reflects the regular representative choices from Finland onward:

Finland: Finnish rock band Pertti Kurikan Nimipäivät (translating as Pertti Kurikka’s Name Day, originally Kovasikajuttu, or Punk Syndrome) will be representing their country at this year’s Eurovision event. This group made history due to all four of its members dealing with various stages of both Down Syndrome and autism. The boys will be singing the song Aina mun pitää (meaning “whenever I have to”) after winning their representation on February 28 following winning Uuden Musiikin Kilpailu 2015 (Finland’s national selection for Eurovision Song Contest 2015).

FYR Macedonia (former Yugoslav Republic of Macedonia): 31-year-old Daniel Kajmakoski, who became nationally infamous for winning the first season of X Factor Adria. He will perform the song Lisja esenski, with which he won the Skopje Festival 2014 (thus confirming his participation in Eurovision 2015.)

Georgia: Nina Sublatti (real surname Sulaberidze) was chosen to represent her nation for Eurovision slightly over a year following her crowning as winner of Saqartvelos Varskvlavi (the Georgian version of any given Idol show). She was chosen for Eurovision via a competition hosted back in December of 2014, in which she and four other candidates were selected for evaluation regarding who would be chosen to participate in the coming year’s ESC. In mid January, Sublatti was announced as winner of this contest and pushed forward as a full contestant in the 2015 Eurovision Song Contest.

Greece: Maria Elena Kiriakou won the first season of The Voice of Greece, at the age of 30 (the coronation occurred in May of 2014.) She will be singing in support of her country via performance of the track One Last Breath. To date, Kiriakou has one impending studio album scheduled for release (at this time, the date is still unknown) entitled Dio Ageloi Sti Gi.

Hungary: This central European country’s choice for Eurovision representative is Boggie, a 28-year-old singer-songwriter best known for her track Nouveau Parfum, the video for which is equally as famous in the artist’s home country (it was praised for raising awareness to the growing tendency for the media to photoshop and alter every aspect of a woman’s being before deeming her ‘acceptable’ for presentation). The song she is choosing to sing is called Wars for Nothing.

Iceland: Performing for her country in this year’s Eurovision is María Ólafsdóttir. The 21-year-old won her nomination after reaching the final two in Söngvakeppnin 2015 (Iceland’s national final to decide which artist will represent the country in the upcoming Eurovision Song Contest.) She was crowned via the song Unbroken, which as of right now only appears on the album Söngvakeppnin 2015, a compilation of tracks performed by each individual taking part in the aforementioned Eurovision entry competition. Ólafsdóttir does not currently have any songs or albums released in her own right.