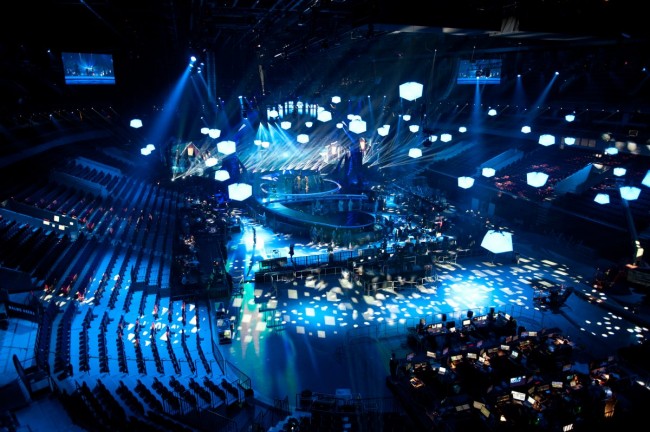 The first semi-final for this year’s Eurovision Song Contest will be held on May 19 in Vienna, Austria. The list of countries that can vote in this SF are Australia, Austria, France and Spain (the guest country, the host country, and two out of the five countries with straight-to-final-status.) The list of participants that will compete for a spot in May 23’s grand final are as follows:

Moldova: Representing this country in this year’s ESC will be 22-year-old Eduard Romanyuta. The Ukranian born singer will be performing the song I Want Your Love for his shot at the grand final. He has attempted to represent the Ukraine (who made the decision to not participate this year for both political and financial reasons) three times (2011, 2012, and 2013) and although he did significantly better each time, his performance was not enough to put him through to the next stage of the Eurovision Song Contest.

Armenia: Supergroup Genealogy will be vying for their spot with the song Face the Shadow. The band consists of six members all born in a different continent but still of Armenian descent, whose ancestors had each fled to a different country after the Armenian genocide of 1915.

Belgium: Singing the song Rhythm Inside will be 18-year-old Loïc Nottet. In 2015, Nottet placed second in the third season of The Voice Belgique. His video for the song in question has already reached almost 440k views, despite only having been posted a little over two weeks ago.

Netherlands: 42-year-old Trijntje Oosterhuis will be representing this country with the song Walk Along. Oosterhuis is incredibly well-known in her home nation, having released nine studio albums, one of which soared straight to number one. Some of the others reached up to the top five of the music charts.

Finland: The punk rock band Pertti Kurikan Nimipäivät will be performing Aina mun pitää (I Always Have To). They are best known for being featured in the Finnish documentary The Punk Syndrome, in which they discussed their lives as singers with developmental disabilities.

Greece: Maria Elena Kyriakou, who won the first season of The Voice of Greece, will be singing One Last Breath. The 31-year-old gained notoriety on the aforementioned singing show through her mentorship with nationally infamous singer Despina Vandi, who chose Kyriakou to be on her team throughout the show’s process.

Estonia: Elina Born and Stig Rästa will represent their country in this year’s Eurovision Song Contest with the song Goodbye to Yesterday. Born has tried her hand at Eurovision before, attempting to represent the country in 2014 with the track Enough. She also came in second place on the fifth season of Eesti otsib superstaari. Rästa has been a part of two relatively well-known bands, Slobodan River and Traffic. He was also in a group called Outloudz, which he joined in 2010 but are no longer together.

Which of these seven countries listed will have their participant(s) sent to the Austrian grand final for this year’s Eurovision Song Contest remains to be seen. As mentioned above, the semi-final in which this is decided is set to be hosted on May 19, 2015.