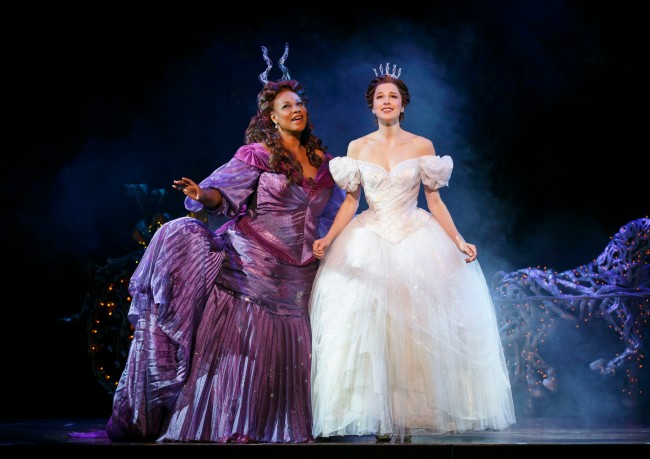 “Rodgers & Hammerstein’s Cinderella,” the classical enchanting story paired with well-known songs, were paired with at-times visually stunning staging when the musical opened at the Ahmanson Theatre in Los Angeles on Wednesday night. The winning performances of Paige Faure (Ella, who is nicknamed Cinderella by her stepmother), Andy Huntington Jones (Prince Topher, as he is called here), and Kecia Lewis (the fairy godmother) help the show rise above the new plot element added to the book for this version of the tale.

This Cinderella is largely the Richard Rodgers and Oscar Hammerstein II version of the timeless fairy tale that was written as a made-for-TV musical for Julie Andrews in 1957. It was remade with Lesley Ann Warren in 1965 and Brandy and Whitney Houston (as the fairy godmother) in 1997. While it was performed on stages for years, it was revamped as a Broadway production, with new plot changes and added songs in 2013. It is the national tour of the Broadway show that is playing in Los Angeles through April 26.

The best elements of the show are the original songs and the magical costume transitions. They still offer all ages A Lovely Night. But the story was transformed slightly and other songs added for the Broadway staging. The result takes some of the magic away, not with the clock striking 12, but with hackneyed plot changes and anachronistic wisecracks.

Faure is appealing as Ella, the spunky kindhearted girl orphaned and left with an unloving stepmother and stepsisters. She is charming trying to daydream her way out of her miserable home singing In My Own Little Corner.

The growth of Jones’ Princely role is one of the story changes. The musical is as much his story now as Cinderella’s (he even sings In My Own Little Corner, albeit his throne he is stuck on). He is also orphaned, being pushed around and put upon by the Lord Chancellor. He is both dashing and shy, which gives the character more depth, striving to figure out his role. Or, as the Lord Chancellor put it during one of those anachronistic wisecracks, “Worrying about that self-worth again?”

Together, the couple is winning and largely makes the evening. They are bewitching in the ballroom and later singing Ten Minutes Ago and Do I Love You Because You’re Beautiful.

Kecia Lewis powers through her numbers as Cinderella’s Fairy Godmother, soaring above the stage with her strange looking costume that clearly was designed for the flying bits. She convinces Cinderella in song that It’s Possible and There’s Music In You.

Sitcom star Fran Drescher reprises her Broadway role as Madame, the evil stepmother who hopes her daughters marry royalty (She actually says in this production, “We are teetering precariously between upper-middle class and lower-upper class.” She also talks about Venetian glass as a status symbol, and is later amazed at Cinderella’s Venetian glass shoes. The audiences liked the famously annoying accent of The Nanny star but, with the new book, it makes the role more of a caricature.

One change to the story that fails and seems like it was an attempt to add relevance is the politicization. One of the stepsisters is in love with a firebrand reformer Jean-Michel (played by David Andino). He actually asks the stepsister for work at a soup kitchen with him. The character is there to give the prince a conscience about how badly the poor are treated in the kingdom, but the social issue angle just does not work.

The other strange change is a game at the ball called “Ridicule,” where each female vying for the Prince’s hand is supposed to ridicule another one. It is snarky and seems really out of place. Luckily, Cinderella uses her turn to say kind things and push the others to stop the game, as if the audience was not thinking that already.

Rodgers & Hammerstein’s Cinderella is not perfect as changed, but is still great family fare, even if one wants to “ridicule” the book. The musical Cinderella will continue enchanting in L.A. through April, before it moves to Las Vegas. The tour will be in San Diego, Sacramento, Houston, Dallas and Fort Worth in the next few months, and will be touring for the next year.