Solar Eclipse and Its Effects 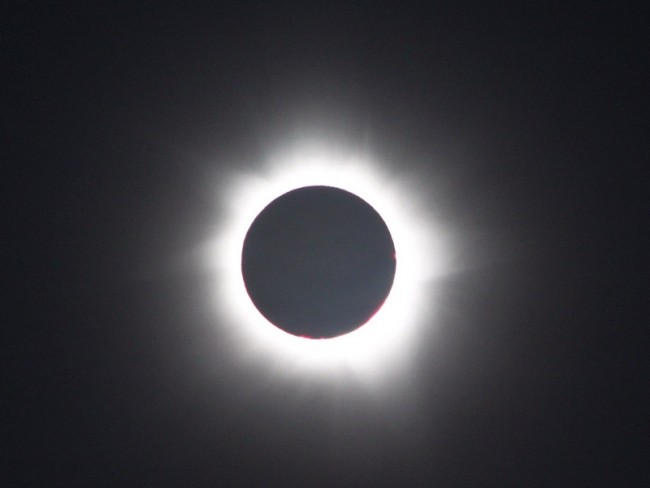 Those who are unable to see the eclipse in person can watch it online. The Slooh Community Observatory is planning to broadcast the solar eclipse live at Slooh.com, starting at 4:30 a.m. EDT (0830 GMT). There will also be a webcast of the total solar eclipse on Space.com on March 20. The Virtual Telescope Project will air the eclipse through the project’s website at 4 a.m.

The point that the eclipse will be best viewed will be 162 miles (260 km) north of the Faroe Islands in the Norwegian Sea. The moon’s shadow that will be projected onto the Earth’s surface will look like a huge arc of darkness 288 miles (463 km) wide and 93 miles (150 km) long. These dimensions are not the usual shape a solar eclipse. The unusual dimensions may be because 13.5 hours earlier, the moon will be closest to the Earth in its orbit, 222,192 miles (357,584 km) away. The shadow will also be passing over the Arctic, striking the Earth at a skewed angle, causing the explicit oblong shape.

Approximately 30 minutes after the eclipse leaves the Faroe Islands, the eclipse ends at Svalbard, in the Arctic Ocean midway between Norway and the North Pole. Svalbard is the most northern place in the world that has a permanent population. 2,642 people create Svalbard’s entire population.

When the solar eclipse is at its greatest point, if the skies are clear, the sun will be completely concealed for two minutes 46.9 seconds. Barentsburg, on Spitsbergen will see two minutes 20 seconds of total solar eclipse at 1011 GMT. The sun will be at a thin 11 degrees. A clenched fist is about ten degrees across, meaning the totally eclipsed sun will be very low, just one fist above the south-southeast horizon.

The weather for this time of year in this particular part of the globe may produce a type of fog making the solar eclipse seem even more mysterious with the effects in the atmosphere. Chances of clear skies is 20.4 percent for the Faroe Islands and 34.6 percent for Spitsbergen. There will be a partial solar eclipse that will be visible over northern Africa, northern Asia and all of Europe. Places in Europe will see approximately 50 to 99 percent of the diameter of the sun eclipsed by the moon. Where 80 percent or more coverage will be seen, there will be a “counterfeit twilight” for a few minutes around the time of the maximum eclipse. Areas that will have an eclipse significance over 90 percent will be, Scotland, Ireland, Norway, Great Britain, northern Finland, northern Sweden and Iceland.

Local eclipse times for European cities can be found at eclipsewise.com. There is also a map showing eclipse times in Africa, Asia and the Atlantic.

WARNING: People in the areas where the eclipse can be seen, be careful. Never look directly at the sun if you are not using special equipment to protect your eyes. Serious and permanent eye damage could occur. It is easy to build a pinhole camera or solar projector with binoculars and be able to safely observe the eclipse.

How to Make a Pinhole Camera: A pinhole camera will project the image of the eclipse on the card. Items needed: two pieces of cardstock, index cards work great. Make a small hole in the center of one of the cards, no larger than 4 mm in diameter. Tilt the card with the hole toward the sun and move the other card below it until you can see the projected image.

The solar eclipse will affect animals. Birds will stop singing when the moon passes in front of the sun. The darkness from the sun being blocked triggers night-time behavior in the birds. Nocturnal animals become alert and farm animals and pets look for a place to sleep.

In previous solar eclipses dragonflies hid under leaves. Ants returned to their ant holes and grasshoppers stopped making their clicking sound. Owners of nervous pets must keep their pets inside to keep them from getting upset. Emeritus Professor of Animal Welfare at the University of Cambridge, Donald Broom, says that animals notice that it gets dark. Even though night comes every day, there is not a substantial change in light in the morning, so the animals are disturbed by the solar eclipse.

Animals grazing in the fields may stop and head for shelter as if it were night. When animals find their routine to be interrupted they get confused and anxious. Insects, moths and butterflies are affected by the change in light. Zookeepers at the London Zoo are taking precautions so the animals are not disturbed. A full solar eclipse affects the way moths and butterflies fly because they use light to navigate. Roosters crow believing its dawn and frogs croak loudly.

During the total solar eclipse of 2001, hippos got nervous and there was a loud chorus of calls from turtle doves. When the eclipse is over, animals act as if it is morning again and sing their songs.

There will not be another total eclipse near the UK until 2081 in central Europe and near Britain in 2090. There will be a partial eclipse in Britain in 2026. It is important to value these rare events and cherish them because they are so infrequent and beautiful that can affect even the tiniest being.

2 Responses to "Solar Eclipse and Its Effects"