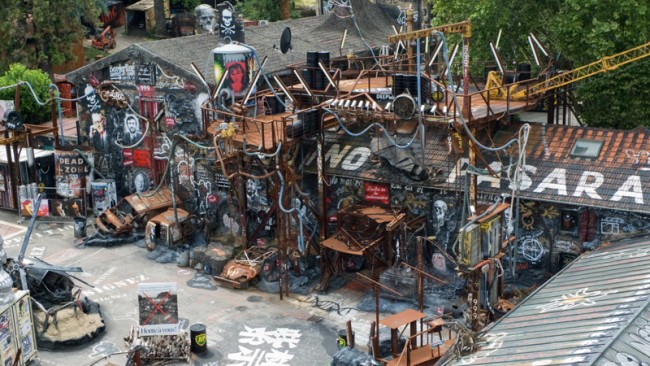 As people become more and more obsessed with shows like AMC’s “The Walking Dead,” and other zombie-based television shows and movies, viewers have started to wonder where they would go if a zombie outbreak ever swept the nation. Therefore, scientists have been studying areas of the country that may allow people to survive and thrive in a post-apocalyptic zombie world. So, they have now deduced where to go if a zombie apocalypse ever torments and lays waste to the United States.

The idea of such a terrible time interested Alex Alemi, a researcher at Cornell University. After reading the novel “World War Z,” by Max Brooks, set in a post-apocalyptic, zombie-run world, he studied the way in which the book’s characters where able to survive. Though, Alemi said there are many more factors to consider in surviving a zombie outbreak. Such an outbreak would most likely begin with a virus or an infectious disease, much like the scenarios in books, movies, and television shows. He explained unlike those scenarios, in which the unfortunate sufferers either recover or die from their ailments, a zombie outbreak with largely result in massive amounts of deaths.

Alemi said zombies are undead – they do not recover. Therefore, the only way to halt their advancement is for people to kill them. Moreover, he said other viruses and diseases, no matter which or how many are modeled, will not affect everyone in the population. However, in the model, researchers are able to turn every individual into a zombie.

Along with a team of additional researchers from Cornell, Alemi devised an algorithm to speculate the best areas for surviving a zombie apocalypse. They will present their model and the findings of the study at this month’s meeting of the American Physical Society.

After creating a continental map of the U.S. that gives users the ability to track the time in which it would take zombies to take over an area, the research team has found that the absolute worst place to be in a zombie apocalypse would be in any large metropolitan area. He said if a contagious disease were to originate in the center of New York City, Chicago, and other big cities, the population, “would be gone within days, if not hours.”

As Alemi and his team tested the algorithm in the interactive map, it was discovered that if a widespread infection started in New York City, it would take less than 24-hours for everyone to turn into zombies. Furthermore, it would take less than a day for it to spread throughout the region into New Jersey, Pennsylvania, and Connecticut, inevitably infecting the entire Eastern seaboard.

Alemi explained people in areas like New Hampshire and Vermont, both of which are more rural and do not have large metropolitan areas, would easily evade an outbreak of zombies for up to a few months. Though, many would have the idea to migrate to less-populated areas like the ones mentioned before.

Zombies walk at a very slow pace. Since their only method of transportation is walking, retreating to a rural, wooded region would be the best likely area in which one could survive.

He explained it is very unlikely that the entire continental U.S. would succumb to a zombie infection. The best places to survive, according to Alemi’s model, would be in remote areas of the country, such as the Rocky Mountains in Nevada and Colorado and the plains of the Midwest.