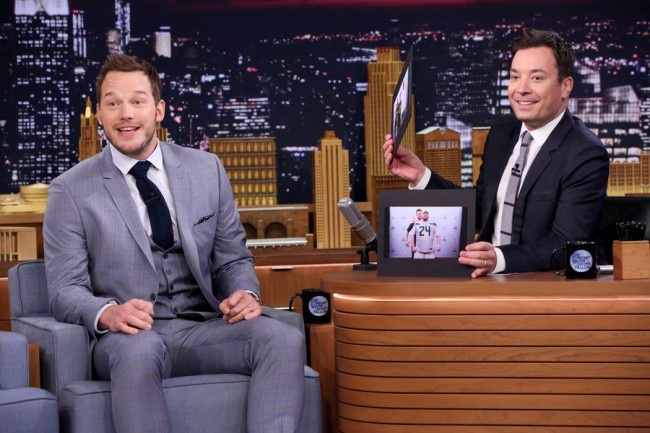 On the Tonight Show this Friday, April 24, Fallon closed out the week with guest Elizabeth Olsen, one of the stars of Avengers: Age of Ultron. Also, Chris Pratt, star of the upcoming Jurassic World, was Fallon’s first guest. He and Fallon sang during a game called Nonsense Karaoke. Check out the clip, below! Jimmy Fallon had on kid inventors in a segment he called “Fallonventors,” and he did his weekly “Thank You Notes,” one of the most popular weekly comedy bits that Fallon is famous for doing.

Jimmy Fallon joked about topics from today’s news in his monologue. He said, for example, that “Yesterday, President Obama hosted the New England Patriots at the White House, but Tom Brady couldn’t make it. Apparently, there was an emergency at the Brady House.” Fallon then showed the famous clip from The Brady Bunch in which Marsha gets hit in the nose by a football.

Then, Jimmy Fallon talked about Hillary Clinton doing reviews of B&B’s and coffee shops, and Ann Taylor Loft, making up what she said about them. Fallon joked that on Cinco de Mayo, Taco Bell will introduce its hottest sauce ever. He said “Just remember, if you try it out, you will be in el bano.”

“Historians recently translated an Egyptian text about a cure for hangovers,” Fallon said. He joked that the hieroglyphs looked kind of messed up so you could tell the Egyptians who made them were drunk.

Jimmy Fallon quipped “A wild coyote was spotted in New York City. It was the dirtiest, mangiest thing seen since Times Square Elmo.”

The Roots played while Fallon took his seat behind his desk, and he said that Chris Pratt will be on tonight, and will play a game of Nonsense Karaoke. Also, Elizabeth Olsen from Avengers: Age of Ultron will be on, he said, and Fallonventors, who were kids who were inventors.

After that, Jimmy Fallon wrote out his weekly “Thank You Notes.” Some of them, paraphrased, were: “Thank you, Take Your Child to Work Day, for basically being a live version of when your co-workers show you photos of their kids.” “Thank you, Day of the Week Pill Containers, for basically being Advent Calendars for old people.” Thank you, friends who have destination weddings, for basically saying ‘Please pay us to ruin your vacations.'” The last one was “Thank you, avocados, for being pears that haven’t been neutered.”

When the Tonight Show came back from a commercial break, Jimmy Fallon introduced his first guest, actor Chris Pratt, who stars in Jurassic World, which will open on June 12. “Ladies and gentlemen, welcome Chris Pratt!” Fallon said.

Fallon talked to him about the Super Bowl show, in which Chris Pratt and Chris Evans and Fallon photobombed people. Fallon showed photos from the game, of them photobombing spectators. Chris Pratt then talked about dressing up as the character he plays in Guardians of the Galaxy, Star-Lord, and Chris Evans dressed up as Captain America, to visit sick children in a hospital.

Chris Pratt mentioned that he had his first job when he was 14, working at a fast food restaurant. He said he would say crazy things over the drive-through intercom, like “Hey, buddy — I need your help.”

Pratt said that his son thinks that he is “a firefighter.” His son asks him things like “Are you going to work on your firetruck?” when he is about to leave the house, and he says “Yes, yes son, I am.”

“Are you a scientist?” Fallon asked Pratt about his movie role in Jurassic World.

“In real life? Yes, I’m a firefighter and a scientist,” Pratt replied.

Pratt talked about the movie more with Fallon, joking “It’s a super slow-paced movie. No one runs and gets hurt.” Then, Jimmy Fallon showed a clip from the movie, in which Chris Pratt’s character is chased by a huge dinosaur and he rolls under a vehicle to try to get away from it. 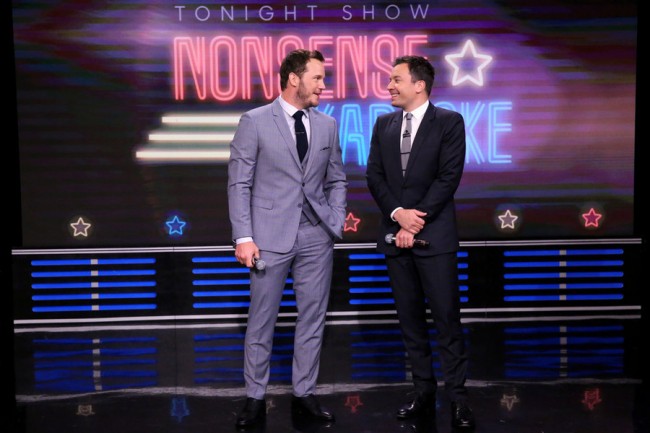 More commercials ensued, and when the Tonight Show returned, host Jimmy Fallon and Chris Pratt played a game of Nonsense Karaoke. The clip of the game is below. Popular songs had some of their lines replaced by nonsense phrases and words. The first song that Chris Pratt tried was Uptown Funk. Fallon did parts of the song, also, popping out from behind Pratt. It was pretty AMAZING!

After that, Jimmy Fallon did Stay With Me by Sam Smith. He sang “Oh, won’t you shave my knee?”

They had time for one more song, and they sang it together. It was Kelly Clarkson’s song, Since You Been Gone.

“You fed a carrot to Optimus Prime/It wasn’t long until I squeezed a swine,” was an example of the lyrics that they sang. 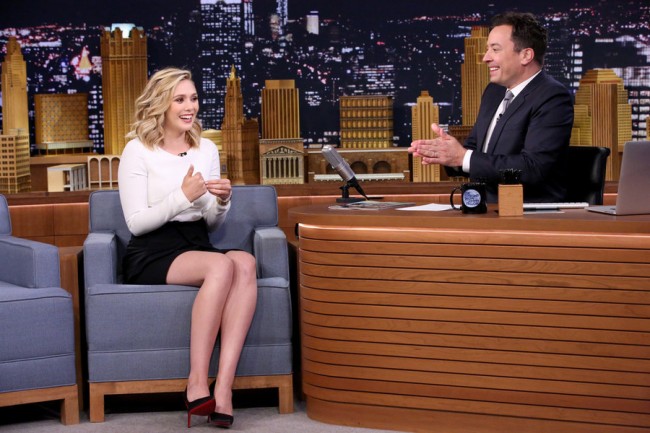 Back from yet another break, Jimmy Fallon introduced the second guest of the episode, actress Elizabeth Olsen, from Avengers: Age of Ultron, opening on May 1st. Fallon asked her “Did you ever invent anything as a kid?”

Olsen talked about her science teacher and that she and her lab partner invented platform shoes. “We sold them to a kid for like twenty bucks,” she said. “They broke after only about a minute after he had them on.”

Then, Olsen and Jimmy Fallon talked about Avengers: Age of Ultron. “You are fantastic in the movie!” Fallon said. He asked “You have mind control?”

“Yes, mind control, telekinesis; I can manipulate the mind,” she said. “I’m the only one that doesn’t need a stunt double, because all I do is stand there,” she said.

Fallon showed a clip, and Ultron said “You’re wondering why you can’t see into my mind.” Olsen asked him if he came to end the Avengers. “I’ve come to save the world,” Ultron replied. “But, also…yeah.” The Tonight Show then headed to another commercial break. 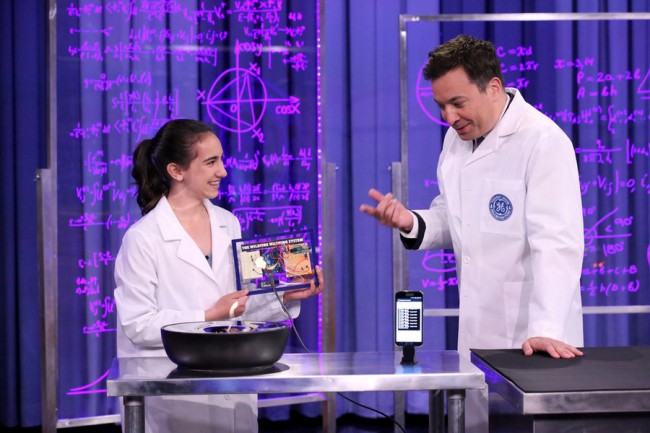 When the Tonight Show came back on, Jimmy Fallon welcomed kids, or Fallonventors as he called them, who demonstrated the inventions, or Fallonventions, that they had created. Sean Violette, who turned eight just yesterday, was the first kid to demonstrate his invention. It was “a paper airplane launcher.” It worked quite well, sending paper airplanes out into the audience.

Sahar Kashayer was the next Fallonventor to demonstrate her invention. It was one that warned people when a wildfire starts in a forested area. She said it has three different sensors, and based on what they decide, the sensors will help give advance warning before a wildfire gets too big to handle easily. Fallon showed off a mini-Squeegee he had supposedly invented, complete with a tiny bucket.

The final inventor was Brooke Boyer, 7, from Little Rock, Arkansas. “What’s a cat’s favorite color?” she asked him. “What?” he said. “Purrr-ple!” she answered him.

The invention was a belt that fastened with Velcro, with a box of tissue paper at the front of it. She also had a plastic bag that could be attached to the belt, as she demonstrated, and when a person was done with his or her Kleenex, he of she could use the bag to dispose of the tissue. GE awarded each of the three Fallonventors with $5,000.

Watching this Friday’s Tonight Show was an entertaining and fun way to end the week. Actor Chris Pratt, from the upcoming movie, Jurassic World, was Fallon’s first guest. He and Jimmy Fallon played a cool game called Nonsense Karaoke. Fallon’s second guest was actress Elizabeth Olsen, one of the stars of Avengers: Age of Ultron, which will open on May 1st. Another of the show’s highlights was checking out the intelligent and talented kids that were on, as they demonstrated their Fallonventions.