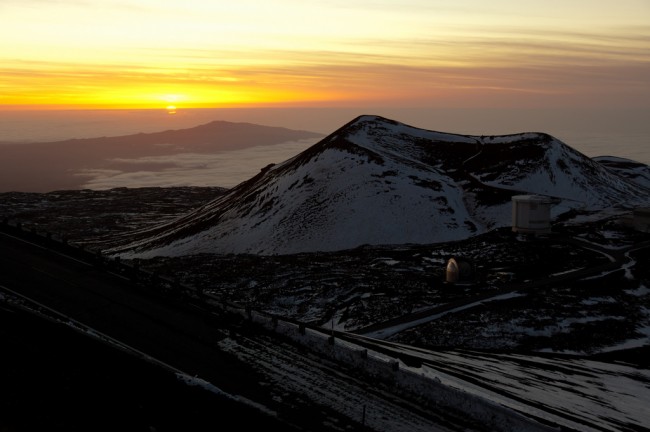 The Thirty Meter Telescope, also known as TMT, is a $1.3 billion project on Mauna Kea Mountain in Hawaii that is scheduled for construction next Monday, but an increasing number of protestors against the project has led to law enforcement officers making arrests. The purpose of creating this telescope is to provide astronomers with crisp clear images of objects that are at too far of a distance for any other telescope to see. With this capability, scientists will be able reach and study in detail areas of space that have never been explored before. Meaning, there could be discoveries made that will answer some of the most fundamental questions about the universe that people never would have believed could be answered. Knowing all the discoveries that could be made and knowledge that could be gained by building this telescope, the protesters against the Thirty Meter Telescope construction are keeping themselves busy and not letting up, not even a little bit.

Mauna Kea Mountain is considered to be a very sacred and spiritual location for the natives of Hawaii because it happens to be the place where the Hawaiian people spread the ashes of the deceased. According to ancient Polynesian history, this mountain was said to be the place where Earth Mother and Sky Father, which were the ancestors of all human beings, would come to meet with one another.

In the beginning of April, about a dozen protesters blocked the way of 15 trucks from getting on the road leading to the site of construction. The protest caused Thirty Meter Telescope workers to be stranded for more than eight hours. Unfortunately for the protesters, they left in handcuffs that day. Recently, there have been similar protests, but authorities wasted little time warning people that they will not hesitate to make more arrests. The protests continued in force on Monday, when hundreds of students and faculty members from the University of Hawaii were busy performing a walk-out with thousands of people who assembled on the island to demand authorities put a stop to the Thirty Meter Telescope project. Protesters are standing firm in their belief that constructing TMT would slaughter the culture that embodies Mauna Kea.

Scientists spanned the entire globe for five years measuring every single feature of the atmosphere in search of the perfect location that would allow the Thirty Meter Telescope to work at its optimal level of operation. Mauna Kea Mountain is located about 40 percent above Earth’s atmosphere. Meaning, the climate, which is cold and dry, is exceptional for allowing TMT to provide astronomers with images of the highest quality. In efforts to preserve the most common areas of the summit where spiritual practices were performed, there was a decision made over a decade ago to restrict anyone from building any observatories at these particular areas.

That decision is still being respected today. From the very beginning, the TMT project planners were very focused and dedicated to protecting as well as preserving the Mauna Kea culture. There was a lot of time spent finding a location on the summit that had very little environmental and archeological effect. The site that was selected has no endangered bugs or plants, no archeological shrines of any sort, and no burials grounds. The project planners did the busy work to identify the most respectful location on the summit for the Thirty Meter Telescope to keep protesters at bay, but that does not seem to mean a thing to the Hawaiian natives, at least not right now.