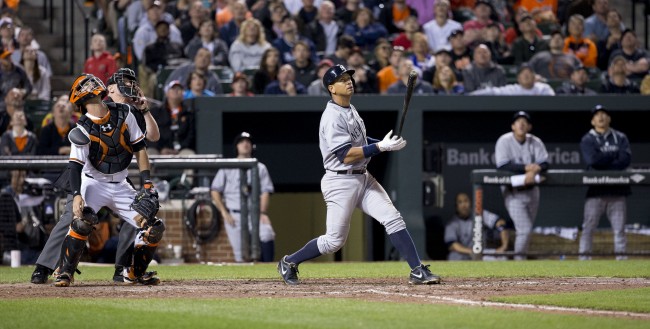 On Friday, May 1, New York Yankees baseball player, Alex Rodriguez, rocketed his 660th career homer straight into the Green Monster seats at Fenway Park, and right into the hands of a Boston Red Sox fan that had no interest in giving it up. Rodriguez, not interested in being bothered with the matter, says the Red Sox fan can keep the historic baseball, because to him, it is nothing that serious to negotiate about.

Sadly for Boston, the New York Yankees beat the Red Sox 3-2 right on their own turf. Guaranteed, Rodriguez was having a much better day than his opponents, because not only did his team win, but the home run Rodriguez hit earned him a fourth place position on the Major League Baseball all-time list, making it a tie between him and retired American Major League Baseball center fielder, Willie Mays.

Mike Shuster, the 25-year-old Red Sox fan from Warwick R.I., who caught the ball that marked New York Yankees player Rodriguez’s 660th home runner, appeared to have quite the Kung-Fu grip, because he was not releasing that ball for anything. The young financial advisor, which means he is a person who knows a little something about money and sales, is not exactly sure what it is he wants to do with his prized possession.

Shuster said he could not see himself handing the ball over to the Yankees player, but he was willing to give him the opportunity to take a picture with it, for memories sake. Funny part is, Rodriguez never even asked for it. Instead, he said the Red Sox fan can keep the historic ball, because the whole thing was not that big of a deal.

After the game, the Red Sox fan commented about how he knows that Rodriguez would possibly be getting $6 million just because he hit that home run. That statement alone is enough to suggest that perhaps the type of exchange the fan had in mind was just a little bit of money. Considering the circumstance, it might be safe to say that the translation of a little money would be a lot of money, in financial advisor speak.

Many people were just curious as to why the fan could not just live in the moment and then throw the ball back. Shuster says that he chose not to throw it back, because too many people who catch baseballs do that at games and he wants to be different, original. He had suggested making a video of himself blowing it up and then posting it on the web for the world to see.

For the most part, the public just thinks the fan was being an opportunist. He found himself in a crazy, once in a lifetime situation and like a lot of people these days, he was only looking for a handout. Rodriguez kept it classy and said the Red Sox fan can keep the historic baseball. More often than not, people who try to find personal gain in any given situation, usually end up with less than they started with. In this case, Shuster’s ego and false sense of great importance left him with a whole lot of people thanking their lucky stars that they were not “that guy.”