Chris Brown has spoken out once again on social media about his relationship with God, but how much of this is true and how much of it is just an attempt by the reputed bad boy of R&B to clean up his image? On May 28 he appeared to post an apology for his negative behavior and said that he believed he was receiving karma for ‘being a dog sometimes’. The post, which featured alongside an image of Brown lounging around with his feet up near an idyllic blue sea, saw the singer allege he is now changing his ways, an act he attributes to talking to God.

Born in Tappahannock, Virginia, Brown was a natural entertainer. As a child he excelled in singing and dancing, performing in local talent shows and becoming a regular in his church choir. Encouraged by his Day Care worker mother, Joyce Hawkins, Brown had landed himself a record deal with Hitmission Records by the age of 13. Brown, however, has claimed domestic abuse and poverty blighted his childhood and that the church was his saving grace, ‘It was difficult growing up. We didn’t have everything we wanted,’ he said, ‘I was one of those kids who had more church clothes than school clothes…my mom knew what she was doing like, I’m going to keep you out the streets and put you in the church first’.

For all his mother’s best efforts, Brown claims witnessing his abusive stepfather’s actions as a young boy led him to his own thoughts of violence. In 2007 he told reporters that he had warned his mother, when only 11 years old, that he would go to jail for killing her husband, Donelle Hawkins. Blinded from a failed suicide attempt, Hawkins is said to have beaten Brown’s mother routinely, causing the young singer to fear for his mom and himself, ‘He made me terrified like I had to pee on myself,’ Brown said, ‘He made her nose bleed. I was crying and thinking, I’m just gonna go crazy on him one day’. 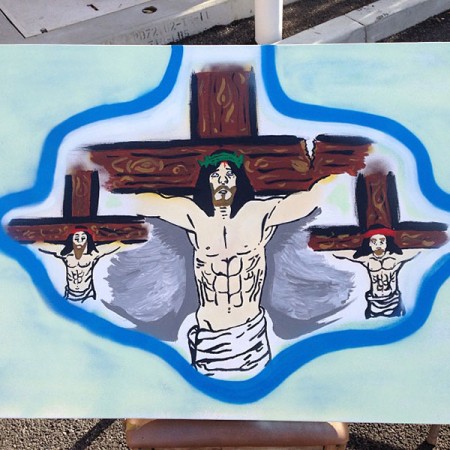 Despite his disgust at the domestic violence endured in his childhood home, the musician would go on to commit the sins of his stepfather during a brutal attack on then girlfriend, singer Rihanna, in 2009. Having admitted to the crime and undertaking 52 weeks of domestic violence counselling, he later thanked Rhianna for her forgiveness and understanding. Any penchant for angry outbursts, however, had not been curbed as in October 2013 the singer found himself once again in trouble with the police. A parking lot scuffle with Frank Ocean would lead to time in county jail as well as a stint in a rehabilitation facility.

It was upon his release from jail following the Ocean incident that Brown appears to have rekindled his relationship with God. A short time after leaving Los Angeles County Jail, he tweeted his appreciation for the support received from family and fans, as well as a ‘Thank You God’. It is not uncommon for those in custody or rehab to find God. The support and forgiveness offered by religion is often associated with helping offenders find a new path in life, but is this the case with Brown or is he just playing the God card to his advantage?

Many Christians could argue that Brown has not, in fact, changed his ways. Although reports of violence have died down in recent months, criticism over the way he handles his personal matters has arisen. Having finally admitted parental responsibility for his illegitimate daughter, Royalty, his baby’s mother has claimed the R&B singer is not only fighting her in court against adequate child support payments but that he also missed their daughter’s first birthday party. As reports flew in declaring him a dead beat dad for choosing to work instead of celebrate this milestone with his baby girl, those in the star’s camp claimed he had actually offered to fly Royalty, her mother Nia Guzman and their entire family to Disney World for the celebrations instead. Guzman had refused the offer.

To add to the drama, this week also saw R & B’s bad boy hurling abuse at a 14-year-old fan, Chrianna_X, on Instagram. After reading an interview in which her hero discussed his sex life with Rihanna and Karrueche Tran, the 14 year old fan offered some support and advice to her idol, asking him to ‘stop making people mad’. His reply, in which he called the girl a ‘d***head’ and claimed his fans ‘will never matter’ to him, is being criticized as overly harsh and unnecessary. The last time Brown caused controversy on Instagram was when he posted an image of Jesus during the crucifixion and likened his own persecution to that of the religious figure, a move that was hailed blasphemous at best.

Brown may be attempting to reconcile with God, but the truth behind this relationship is that it has far to go. Violence, blasphemy, poor parenting and insulting children is not in the Christian way and if Brown does not acknowledge this soon, his mother’s attempts to keep him out of the streets and in the church may be considered a failure.

Billboard: Chris Brown Reflects on Karma, God & ‘Being a Dog Sometimes’ on Instagram

Mirror: Chris Brown threatened to kill his stepfather when he was aged just 11

Fameolous: Chris Brown Makes 14-Year-Old White Girl Cry On Instagram After He Goes In On Her