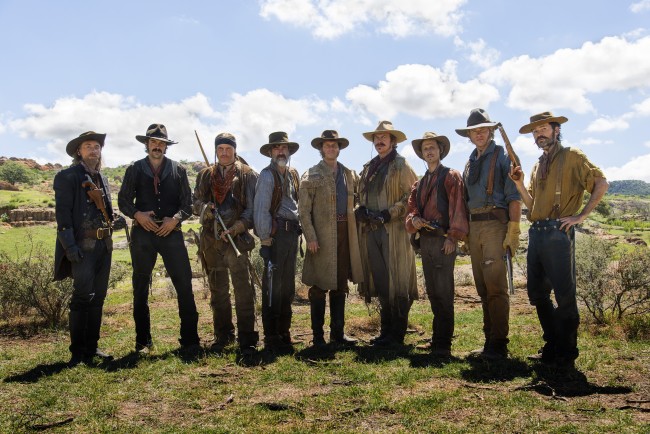 On May 4, the History Channel announced their upcoming summer lineup which includes all premieres and specials. The schedule includes the return of some fan favorites, plus four new series and the 10 hour Texas Rising series event. The summer lineup kicked off as of May 6, with the return of American Pickers. The summer programming for the channel is as follows:

Lost in Transmission which premiered on May 7 at 10 PM EST. The program, which is hosted by George Flanigen and Rutledge Wood, is an adventure in rescuing America’s classic cars. The two men are on what amounts to a mission through the barns, backyards and garages of the country and they are taking History channel viewers on that journey with them. The hosts will rescue automobiles that are unappreciated and in need of some rehab, and give them all a new life.

Texas Rising is a series event set to premiere on May 25 at 9 PM EST. This special series has been expanded to a 10 hour event. With an all-star cast that includes Bill Paxton, Ray Liotta, Brendan Fraser, Jeffrey Dean Morgan and Chad Michael Murray, amongst others, the series tells the history of Texas and the Texas Rangers. The story did not end with the Alamo, and in fact Texas Rising is set to delve into the heart of Texas’ history.

Leepu & Pitbull is premiering on June 16 at 10 PM EST. This program follows Steve “Pitbull” a master mechanic and Leepu a Bangladeshi car designer. The men take old cars, often described as clunkers and transforming them as part of a business venture to bring in money and help transform much-loved cars into custom vehicles.

Alone is a reality series unlike any other, set to premiere on June 18 at 10 PM EST. This program on the History channel will follow 10 of the most hardcore survivalists as they go about surviving the wilderness of Vancouver Island all on their own. Each of the individuals will have a single backpack filled with whatever they can fit into the bag and a camera to record their experiences. All alone, these people will have to feed themselves, create shelter and brave not only the elements, but also the local wildlife. Whoever is able to last the longest will take home a prize of $500,000.

Forged in Fire is a new competition series premiering on June 22 at 10 PM EST. Wil Willis is the host of this new competition, he is a former Army Ranger, a weapons expert and a decorated Air Force para-rescue specialist. The purpose of the series is to have an assortment of the best bladesmiths in the world creating some of history’s best known and perhaps most iconic edged weapons. Some of the weapons that will be crafted include medieval broadswords, Japanese katanas and even ancient throwing blades.

American Pickers premiered their latest season on May 6 at 9 PM EST. This season once more sees Frank and Mike scouring the United States rescuing long forgotten relics and antiques. During the season the two even meet up with Black Keys member Dan Auerbach as he expresses interest in a Chet Atkins Gretsch vintage guitar.

Pawn Stars, a staple of the History Channel, premiered their newest season on May 7 at 9 PM EST. This season sees Rick heading to Los Angeles for an auction of a number of the shops items. He will also be hunting down some new finds for the shop as well. Back in Vegas, Chum and Corey are their normal selves, showcasing their interest in a Star Wars script and a mini monster truck.

Counting Cars is set to premiere a new season on June 16 at 9 PM EST. This season sees the crew delving deeper into the world of Rock and Roll, while Danny Koker sees his addiction to cars increasing to a point where he is falling in love with the cars he is restoring and attempts to keep more than he sells.

Mountain Men premieres its latest season on the History Channel on June 18 at 9 PM EST. This year sees everyone planning for the winter season earlier, while still being willing to face the season head on. The season is also introducing a new mountain man in Morgan, who is in Alaska, as he attempts a trek of nearly 300 miles across the “Great Alaska Range.”

The summer lineup for the History Channel brings back some of the networks most popular shows, while also adding some new series to the mix. From competition series to a sweeping epic, the network is once more showcasing some of the best educational programs.