Popular female rap artist Iggy Azalea, best known for her top hits Fancy and Black Widow, recently announced that she had canceled the entirety of her United States tour The Great Escape. There has not yet been a definitive reason for said cancellation, and the upset has been quite strong throughout various social media outlets.

The 24-year-old’s announcement, which came not through her directly but rather through a string of emails sent from her management company to those who had already purchased tickets, occurred shortly after her 2015 Billboard Music Award win for Best Rap Song. The Australian was criticized for receiving said achievement when her song was said to have been released outside the allotted time slot of March 10, 2014 to 2015 of the same month. The song in question, Fancy (featuring Charlie XCX), was released on February 17, 2014. This was almost a month prior to the required date for the BMA’s, and nay-sayers have been strong in their protest to Azalea receiving the aforementioned award.

The award launched a petition that took no time at all to circulate the internet and get thousands of signatures, and the document was entitled “Retract Iggy Azalea’s Ineligible Award for Fancy”. The forum insinuated that the award in question would have most likely gone to fellow female rap artist Nicki Minaj, for her hit track Anaconda, should Azalea’s track not have qualified as the general public believe it should have not. The Minaj fans in question are said to have reflected that of some 15,000 people. 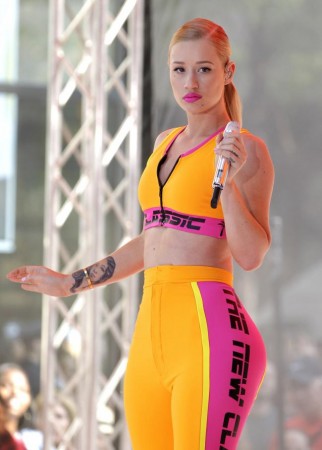 This is not the first time that a scheduling change has interrupted The Great Escape tour. Indeed, the California leg was supposed to start back in April of this year (2015). The new change of date was made to reflect that of September 18, in San Diego.

Minaj was not the only popular rap artist that Azalea beat out for the award. Bobby Shmurda’s Hot Boy, as well as Big Sean’s I Don’t F**k With You got shunned to the side for Fancy. Azalea was extremely grateful following her award, taking to Twitter to share her feeling regarding having received the honor. She thanked her fans profusely, and went on to say that it was a magnificent achievement on her part and that she could not be more happy in the time surrounding her win.

This is not the rapper’s first foray into conflict. Indeed, she is probably one of the more prominent artists who have a very divided fan base in terms of who loves them and who hates them. Due to her tendency to start Twitter fights and seemingly start beef with anyone who does anything in the slightest which upsets her, along with the fact that she does not always say the most sensible or reasonable things, Azalea has acquired quite the hateful group of people towards her existence in the music business. On the other side, however, many believe that she is simply misunderstood and deserves to be a part of rap just as much as anyone else does.

Azalea took to Twitter on Friday to express her apologies regarding her US tour, The Great Escape, having been canceled. She is very upset that she has potentially let her fans down, but promises them that she will be back on the road again as soon as she can to make up for it.