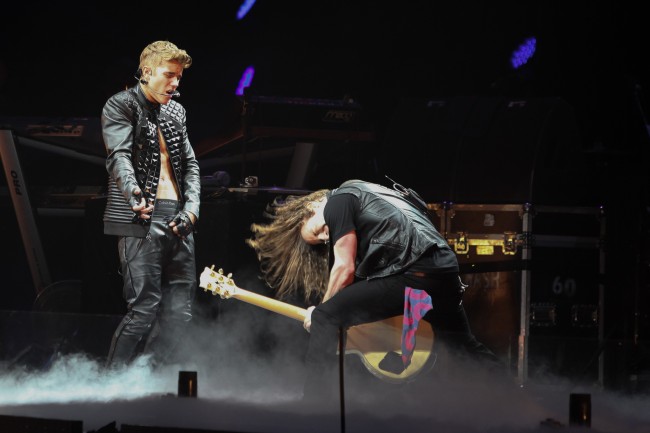 Iran does not seem to stand a change against Justin Bieber because his bare-naked chest has bypassed the country’s targeted censorship and the Iranian government is not happy. The pop star’s abs made their comeback on the screens of smartphones all around Iran and it has caused somewhat of a crisis for government officials. Bieber’s Instagram account, along with the accounts of other popular Hollywood stars and fashion designers, such as Jennifer Lopez, Kim Kardashian, Jimmy Choo, and Gucci, were all part of the 983 accounts blocked by the Iranian Republic. Due to Bieber’s and others pages being considered too racy, the government of Iran denied people from gaining access.

Somehow, Bieber’s once blocked Instagram account has found a way to bypass censorship, allowing all citizens of Iran granted access to his and other accounts that the Iranian government tried to keep restricted. Internet researcher, Mahsa Alimardani, stated the reason for Bieber’s Instagram account re-appearing is the result of the social network’s recent connection encryption between the site’s server and smartphones. Meaning, third parties are unable to pin-point the exact accounts that users are connected to, which makes it impossible for the Iranian government to smart-filter the website.

Since the protest movement in 2009, the government of Iran has viewed the Internet as a channel that leaves users completely unprotected for national security. When new advancements in communication technology erupted with websites and social networking abilities, such as blogging, Facebook, and streaming television online, the Iranian government quickly grabbed the reigns on Internet content and pulled. Many websites, such as Twitter and Facebook, were either shut down or censored for material and accessibility.

According to statistics gathered from the government of Iran, 70 percent of the Iranian youth, which just so happens to make up the biggest percentage of the people in the country, demographically speaking, have the capability and clever-mindedness to get around the filters that the government has put in place to restrict access to certain content. Iranian authorities, having been given the responsibility of maintaining control of the Internet through censorship, found the task quite cumbersome, considering their restrictions on content had proven to be ineffective. This brought a lot of frustration within the Iranian government.

When the use of smart filtering entered the picture, the government of Iran believed that this method of targeted censorship was the answer to the issue of any and all Internet content being available, accessed, and viewed by the country’s users. Instagram was Iran’s very first social media website that utilized this method of content censorship. The government believed it was the perfect social networking site to try smart filtering on, since the technical features of the site itself made it the best choice.

The new technique was working for a period of time, which made the Iranian government confident that they had solved the problem of Iranians accessing material they found to be highly inappropriate. However, that all went out the window with the company’s recent server connection encryptions.

Instagram chose to not comment on the number of Iranians that are active users of the social network site, but the user percentage in Iran seems to be increasing by the day. The company also declined to make any statements regarding Iran’s attempt to censor specific content on the website, but Instagram spokesman, Gabe Madway, stated that the social network site is planning to roll out encryption throughout the entire network.

Now that Bieber’s shirtless images have bypassed Iran’s targeted censorship on Instagram, the country’s government is back at square one. The government’s technique of smart filtering has failed to live up to its name.

One Response to "Justin Bieber Bypasses Targeted Censorship in Iran"