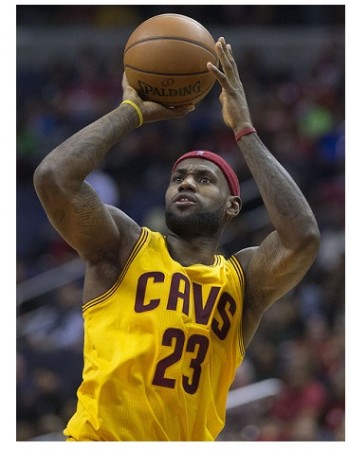 LeBron James is ready to take his team to the NBA finals. He understands the difference from being a good player and a great player is the sacrifice one is willing to make along the journey. Many times it is not that players do not want more, far too often they are not willing to pay the price required to achieve more. King James displayed greatness when he refused to retire to the bench on Sunday night and instead chose to keep his team alive despite his injuries.

Basketball is always a thrill to watch when the opposing teams are this close to a championship ring. Championship status begins long before players get this far in the game. The sacrifice necessary to reach the NBA finals begins during of the off-season by counting the cost; which includes hours of film study, practicing, fine-tuning the body, viewing scouting reports, rehearsing plays and studying the greats.

James, who already has two rings, understood part of the sacrifice he needed to make along his journey was reconciling with the team that gave him his start. When King James returned to the Cleveland Cavaliers he vowed to be an example and leader for his team. James knew it would take time to prepare the team to compete on a championship level, but the King has now braced for a strong finish.

The team started off rough but soon earned a spot in the Eastern Conference playoffs. They are now geared up, under the leadership of James, for a place in the finals. When speaking of his team, King James said:

I demand excellence of myself and every one of my team members. I want them to be great. I see so much potential and demand a lot out of them and they respond very well to my leadership.

Coach David Blatt agrees that James is the leader and confirmed the players know it as well. Not only does LeBron lead the team vocally, but as all can see, he does so from a performance standpoint. Blatt said it helps to have his influence because James has been through this so many times, especially when dealing with the players who have never been to a playoff before. James makes everyone around him better and it shows on the floor, according to Blatt, who added:

He is a special guy, it is not hard to find yourself sitting, standing and watching because he is a special, special player. But on the other hand, he is engaged in everything that is happening and that keeps the other guys on their toes and forces them to realize what it takes to be that kind of player in terms of approach, focus and staying on point.

When King James first returned home, it took time for the team as a whole to build trust with each other. Kyrie Irving has been the “man” since his arrival to the team and now needed to allow space for the King to reign. This is not always an easy transition. They needed to learn the nuances of the game, how to carry themselves as a team and win on the court. Both Irving and James agree that the journey for them is more about trust than success. When speaking of King James, Irving said:

Our relationship continues to grow every single day. When things get tough we know what to expect out of each other. We know what gives each other a reaction, what gets us going and how to motivate each other in hard situations.

Despite the current physical challenges and absence of star player Irving, King James has braced himself for another championship. James has his eye on the prize as he leads his team toward their common goal. On Sunday night with 37 points, 18 rebounds, 13 assists and three steals King James led the Cleveland Cavs to an overtime win of 114-111 against the Atlanta Hawks.

The finals are quickly approaching and the Cleveland Cavaliers are preparing for a sweep in the fourth game of the NBA Eastern Conference. Cleveland fans believe tonight will be evidence of their team’s passion, under the leadership of LeBron Raymone James, to compete and become champions. It has been a long time coming for the Cavaliers, but their time is now. With another championship within arm’s reach, King James has braced himself for a strong finish.

WKYC: Cleveland Cavs benefit from LeBron James’ leadership
Examiner: Lebron James and the power of reconciliation
SB Nation: LeBron James is still unstoppable when he wants to be