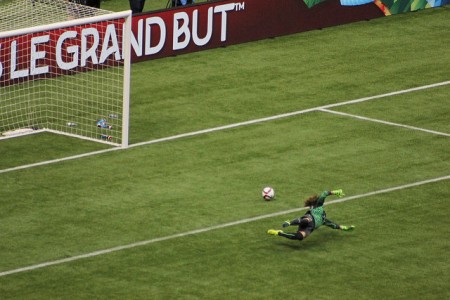 In Women’s FIFA World Cup soccer, England has beaten Canada, once former champions, in a 2-1 win to advance to their first semifinals ever. It was a fantasy beginning for England, as they took the lead in the first few minutes, and all because of a mistake by the Canadians.

Lauren Sesselmann made a costly error for Canada at the very start of the game, which allowed Jodi Taylor to capitalize and score the first goal – just two months after knee surgery. Lucy Bronze followed up by blocking Fara Williams’ free-kick, scoring the second goal to safeguard the lead for her team. The goalkeeper for England’s Lionesses was Karen Bardsley, and her World Cup problems continued when she almost gave her opponent a goal just before the half.

In the second half, the Lionesses became a bit sloppy, but were able to hang on to win, advancing to the semifinals in the World Cup for the first time ever. When the final whistle blew, the team burst with excitement and started celebrating on the field. England had never made it past 16 games before Saturday, but they broke the streak for both the men’s and women’s teams when they beat Norway. It has been 25 years since Welshman Sampson’s team made it past that round in the World Cup.

The team used the same strategies in beating Columbia,coming out strong and standing their ground to keep Canada at bay. England looked like the same team which was victorious in the 2015 Cyprus Cup.

Though they were not quite as strong as when they won over Norway in the second round, England advanced to the semifinals to meet a team they had already beaten in the group stages. Japan lost to the Lionesses early on in last year’s World Cup contest, but triumphed and brought the trophy home with them, and now the Lionesses will have a chance to roar back at them to knock them out of the World Cup contest.

England suffered a bit of a setback when Jordan Nobbs posted on her social media site that a hamstring injury had knocked her out of contention, but they bravely prevailed. The Federal International Football Association denied the injury had actually happened. The story did not seem to affect the England players very much, especially because Taylor, who is only 29,and had only been playing in the league for less than a year, was able to drill one past the Canada goalkeeper. The downfall of the Canadians continued when England made a free-kick deep into their opponent’s territory, and Williams was able to get the ball to the right back to score the insurance goal off the goal post.

England’s scores in the first few moments of the game happened when Canada’s Melissa Tancredi wasted an opportunity to take control of the ball. The Lionesses’ Katie Chapman just missed a third goal when her attempt hit off the crossbar.

Bardsley was injured early in the second half and had to leave the game with a swollen eye. Her replacement, Siobhan Chamberlain, was able to hold her own and England’s concentration was not disrupted, even when the Canada goalkeeper, Erin McLeod, made an excellent move to deny Taylor her second goal.

England almost turned the game over to their host when they started to become a little sloppy, but they picked up steam and defeated Canada at home in front of over 54,000 fans. As soon as the final whistle blew, England burst with enthusiasm, because they are now in the semifinals of the World Cup for the very first time.

England Advances to the Semifinals in the World Cup for First Time Ever added by Katherine on June 28, 2015
View all posts by Katherine →