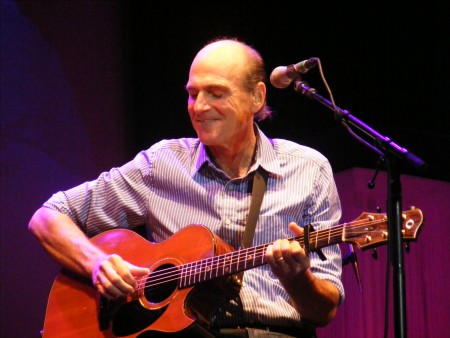 Musical artist James Taylor scored big with his first-ever Number One album on the Billboard 200 chart, knocking Taylor Swift’s 1989 down to the Number Two spot, with 57,000 units sold. Swift was reportedly named after James Taylor. According to Nielsen SoundScan figures, his album, Before This World, sold 97,000 total units, 9,000 individual songs off of the album, and it was streamed 411,000 times, propelling it to the Number One spot.

He has had many hit songs in his long musical career, like Fire & Rain, Something in the Way She Moves, and Don’t Let Me Be Lonely Tonight. He had one of his songs, a duet he did with Carole King, You’ve Got a Friend, hit Number One in 1971, but he never has had an album achieve that lofty status — that is, until now.

Taylor came close to having a Number One album before, with Mud Slide Slim and the Blue Horizon managing to reach Number 2. That was the closest that Taylor had come to having a Number One album, though two of his more recent efforts, October Road from 2002 and Covers from 2008, also came close, both debuting in the Number Four spot. Before This World was Taylor’s first album of all original songs since October Road.

Though Taylor waited for a long time, relatively speaking, before he scored his first Number One album, 45 years and 16 albums after Sweet Baby James came out in 1970, other musical artists have waited almost as long or even longer, in Tony Bennett’s case. Bennett waited 54 years, scoring a Number One album finally in 2011, with Duets II. Bennett repeated the feat in 2014, with his second Number One album, Cheek to Cheek, singing duets with Lady Gaga.

Tom Petty went for 38 years before he reached the top of the Billboard charts with a Number One album. He has had many hits in his career, like American Girl, Here Comes My Girl, Don’t Do Me Like That, Even the Losers, and Refugee, but the highest that any of his albums got on the Billboard charts was Number Two, until Hypnotic Eye came out in 2014. Though songs from the album did not get very much airplay, somehow it still reached the Number One spot.

Like Taylor, both Neil Diamond and Black Sabbath had to also wait over 40 years to get a Number One album. Diamond has had a string of big hits in his career, such as Coming to America, Sweet Caroline, Song Sung Blue and Cracklin’ Rosie, a Number One album had somehow eluded him for 42 years after his first album. In 2007, he finally hit Number One on the Billboard 200 chart with Home Before Dark.

Black Sabbath’s wait was 43 years. Though Black Sabbath was one of the most influential groups in defining the sound of heavy metal music, with albums like Paranoid and Masters of Reality and songs like Iron Man, Black Sabbath, Paranoid and War Pigs. Yet, the band has always had its share of critics, even some who did not think that they deserved to be in the Rock and Roll Hall of Fame. Eventually, this musical prejudice was put aside, and Black Sabbath are now members in very good standing. The band hit Number One with their album, 13, in 2013.

Congrats to Taylor, for having finally scoring a Number One album. He has had a series of very successful albums in his career, but none had ever hit Number One until this year and this past week, when Before This World hit the stores. Most of his songs are somewhat softer and more mellow than, say, those of Black Sabbath or even Tom Petty; but, he has more than his share of loyal fans, and he is still putting out great music over four decades since his first record was released in 1970.

before this world, james taylor, taylor