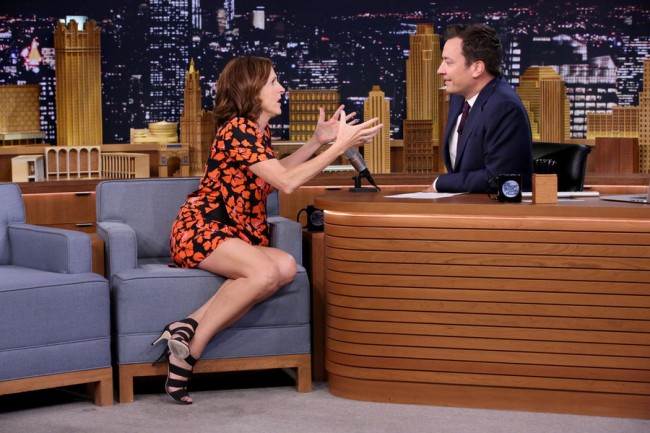 This Tuesday night on the Tonight Show, host Jimmy Fallon had on as his guests Denis Leary, who stars as Johnny Rock in the T.V. series Sex&Drugs&Rock&Roll, and actress and comedienne Molly Shannon, from the T.V. series Wet Hot American Summer: First Day of Camp. Fallon, Leary and Shannon sang Nonsense Karaoke together later in the episode. Kacey Musgraves was the musical guest on the Tonight Show.

Jimmy Fallon walked out onto the stage to a standing ovation. In his monologue, Fallon joked about a variety of topics from the news, like Mike Huckabee saying that he was the only person who fought the Clinton political machine and won. President Obama said ‘Are you sure about that?'”

Fallon also joked about Marco Rubio addressing criticism that he was too young to run for president. He said “It would have been more convincing if his voice hadn’t changed in the middle of his announcement.”

He also talked about Kim Kardashian renting out the entire Staples Center so that her husband, whose birthday it was yesterday, could play basketball with his friends there. He mentioned an incident about an actress getting in trouble aboard an airplane, and one of the members of The Roots then talked about other sorts of “airplane faux pas.”

Fallon then showed a clip ran on CNN about the escaped murderers from New York. The report showed a map with New York designated on it, but it was not New York on the map, but a different state. He also wondered about the reasons behind crime coming down, and then he ran a clip about marijuana becoming legalized.

The Tonight Show host mentioned his children’s book that came out today, called DADA. It is about a father who wants his daughter’s first word to be “Dada.” It is currently the Number One book on the New York Bestseller’s List.

Fallon said that on Friday, Lena Dunham will be on. She has challenged him to a lip sync battle. He said that tonight, Denis Leary and Molly Shannon will be on. He, Denis, and Molly will do “a little bit of Nonsense Karaoke.” He said that the musical guest will be Kacey Musgraves.

Fallon then took a look at the Pros & Cons of Female Viagra. “Pro: It could mean millions for the drug industry. Con: It could mean billions for the 50 Shades of Grey industry. Pro: It’s little and pink. Con: Which is why your wife needs female Viagra. Pro: Taking one and having a good time. Con: Taking five and getting arrested at Brookstone. Pro: To wear off, it can take several hours. Con: Or, just one stupid thing said by a man.” 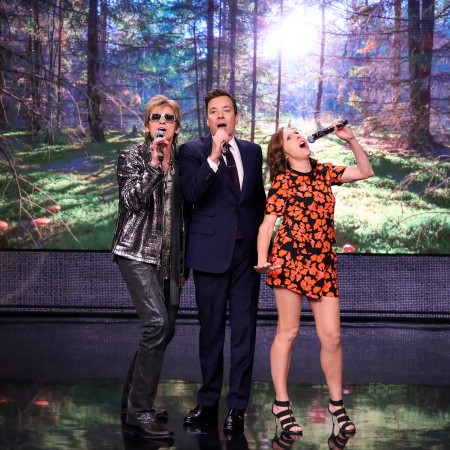 Following the break, when the Tonight Show returned, Fallon sang Nonsense Karaoke songs with Leary and Shannon. They would be singing popular songs, but with some of the words replaced by nonsense phrases. Shannon went first and sang a Nonsense Karaoke version of Waterfalls by TLC. She was AWESOME, sounding quite a bit like the original (at least carrying a tune), but the words were pretty bizarre, to say the least.

Denis Leary went next on the Tonight Show. He sang Pour Some Sugar on Me by Def Leppard. Shannon had set a high bar, but Leary was also pretty INCREDIBLE, singing “Ask your sister for some peas/In a baseball glove,” as one example of the way the lyrics had been changed.

Fallon’s Nonsense Karaoke song was Thinking Out Loud by Ed Sheeran. “Will my thighs be squished by these Spanx?” was one of the lines, and “Jordan was Number 23” was another. Shannon and Leary then joined him as Fallon sang. The result was a thing of beauty! 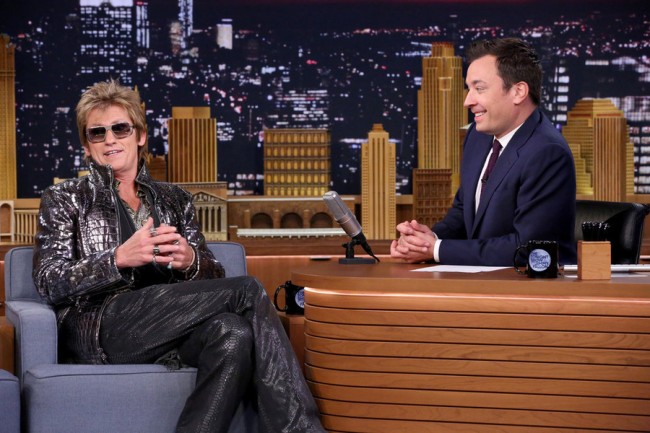 After another break on the Tonight Show, Fallon introduced his first guest, Denis Leary. He was dressed the same way he was during the Nonsense Karaoke bit, in a silver-colored suit. He talked about someone saying she recognized him, at an airport. She said that he was her “favorite character on Glee.” She had mistaken him as being Jane Lynch.

He then told Fallon about jumping up into the air like a rock star, but landing and pulling his hamstring. Fallon said it seemed to be the perfect show for him. Leary said that the plot involved his daughter coming into the picture, and she has better luck at becoming famous.

“It’s not just the story of a band, it’s the story of a family,” Leary said. He compared a band to a family. Then, Fallon showed a clip from the upcoming T.V. series, Sex&Drugs&Rock&Roll, which will be on FX. It looks like it will be a pretty cool and funny show.

When the Tonight Show came back from yet another break, Fallon introduced his second guest of the evening, Molly Shannon. She stars in Me & Earl & the Dying Girl, opening this Friday.

“First of all, you can sing, and you have the moves, too!” Fallon told Shannon.

She said that Fallon’s becoming famous “couldn’t have happened to a nicer person.” She added “I’m just so happy for you!”

Fallon then showed a photo of Shannon’s two boys. She told him that they loved to lip sync. He showed a clip of her son, Nolan, getting up in front of his whole school singing “If you don’t believe me, just watch!” It was a great clip.

Shannon said that she dared her children to do crazy things, like she dared her daughter to go into the Coffee Bean and “ask for an application.” She dared her sons to yell things out of the car window, like “Top of the mornin’ to ya!”

On the Tonight Show, they talked about both of them pretending to be asleep, and then waking up, acting like they did not know where they were at, at first. Then, Fallon talked with Shannon about her movie, and Shannon said she played the mom of the dying girl, Rachel, in it.

Fallon showed a clip from the movie. Shannon talks to two teen boys at her front door, and asks them “Would you two…mice…like a bit of cheese?” Then, the Tonight Show headed to still more commercials. 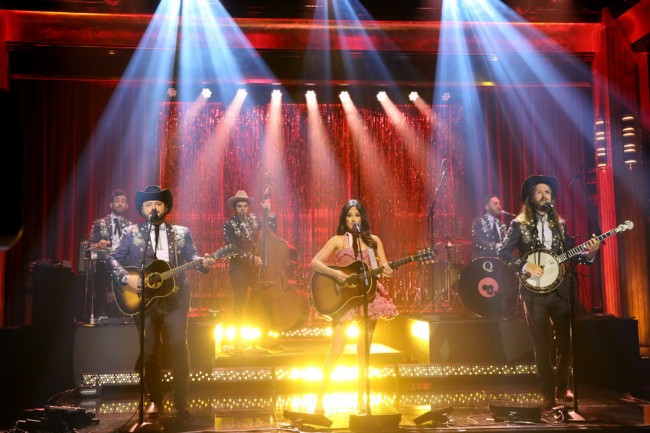 When the Tonight Show returned from the break, Fallon introduced the musical guest of the show, Kacey Musgraves. She sang Biscuits from the upcoming album, due out June 23, Pageant Material, and played the guitar as she sang.

“Mind your own biscuits and life will be gravy,” was one line from the song. Another was “We all have dirty laundry hangin’ from the line.” It was a terrific song, and will likely do well for her. The studio audience applauded enthusiastically as she finished the song.

Besides Kacey Musgraves, the Tonight Show featured Fallon’s two main guests, actor Denis Leary and actress and comedienne Molly Shannon. Fallon not only interviewed Leary and Shannon, but he also sang Nonsense Karaoke songs with them, making for a fun-filled and entertaining episode of the Tonight Show.