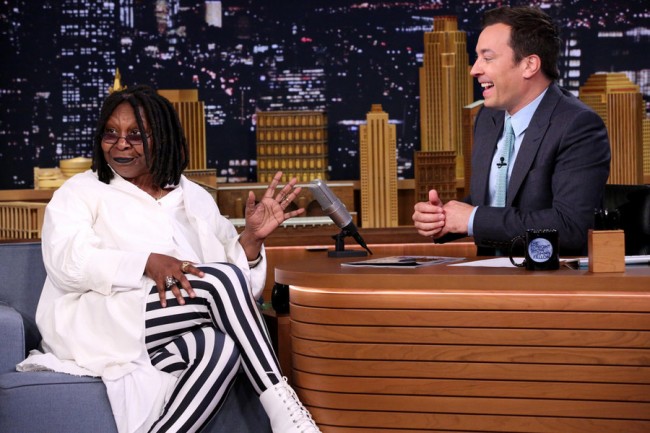 On the Tonight Show this Wednesday, Fallon’s two main guests of the show were one of the co-hosts of The View, Whoopi Goldberg, and actor Christian Slater, from the upcoming T.V. series, Mr. Robot. Also, Hashtag the Panda played the drums, and the show’s musical guest — other than Hashtag — was the group, Of Monsters and Men.

Jimmy Fallon walked out onto the stage to a standing ovation, and he then did his monologue. He joked about topics like “being the new power forward” if one more of Lebron’s teammates gets hurt. He also joked about the Secret Service evacuating everybody when there was a security alert…except for President Obama.

Fallon said that Senator Bernie Sanders said he would like to see even more debates, about very specific topics. So, the Tonight Show host then made up specific debates that would be perfect for certain candidates running.

Fallon then talked about how people get tools into a jail, like the two murderers who escaped jail in New York did. He showed a clip from a news program, in which an expert talked about how easy it was to get things like saw blades into prison, by “suitcasing” them. That means, well…smuggling them in within a certain part of one’s anatomy.

Fallon then plugged his children’s book, DADA, as he has been doing. It is on sale now, and he wrote it because he wants his daughters’ first word to be “Dada.”

Then, Fallon did his “Celebrity Whispers” comedy bit. He added words and phrases in voice-overs to celebs who were whispering to each other, as if the celebs were saying what he had made up. It was somewhat funny, but it helped to see the clip to get the humor.

Following a commercial break on the Tonight Show, Fallon did his periodic comedy segment called “Tonight Show Suggestion Box.” The first “suggestion” was to have members of The Roots draw pictures of themselves using their left hands. The one that keyboardist, James Posey, supposedly did looked just like a photograph of him playing the guitar.

Another suggestion was to find out if Hashtag the Panda could play the drums. Hashtag came out and got behind the drum kit, and he WAILED on them. Fallon got up and gave him a standing ovation. He said that “people really want to see Hashtag dance.” Hashtag obliged, and frenetically danced his way backstage.

One more suggestion a man in the audience supposedly wrote was “Is there any fun way for me to remember my stuff?” He was referring to remembering his stuff when he packs and leaves his house to travel. Fallon said that there was an easy way to remember. He invited two people who he said could help onto the stage, and they sang a ridiculous song that was supposed to be helpful in remembering things.

Yet another person wrote about wanting to see “Black Simon & Garfunkel” sing. They are two members of The Roots, “Captain” Kirk Douglas and Questlove. They are great at singing popular songs in the style of Simon & Garfunkel. They sang a humorous version of Taylor Swift’s hit, Bad Blood.

After a break, Fallon introduced his first guest, Whoopi Goldberg. He first showed the studio audience and viewers watching at home a bunch of socks he had on his desk that Goldberg designed. They are a part of her collection of foot apparel. She also brought Fallon some cheesecakes of assorted flavors, saying “You’ll love them.”

Fallon asked her about her collection of socks. Goldberg said she “has to wear socks, as a part of my craziness.” She loves gnomes, so gnomes were on one example of her socks. She explained why another pair of her socks has monsters on them, relating to Fallon a fairy tale about a man who hid in a trunk in a shop so that monsters would not get him. He drew pictures of cats, and they came to life and attacked the monsters who came into a shop he was in. She told Fallon her socks were around $12 each.

Fallon held up a magazine called Shoeholics, with Goldberg on the cover. She said that “Nobody’s going to put me on the cover of Vogue!”

Goldberg asked Fallon to sign a copy of his book, DADA, which he did. Then, she asked Fallon why Lena Dunham is challenging him to a lip sync battle. she said that she would be glad to challenge Dunham. Goldberg told Fallon that she would sing Goldfinger. Fallon said he would take her up on that, and arrange something…maybe even for tomorrow night.

After a commercial break on the Tonight Show, Fallon introduced his second guest, Christian Slater. He will be in the upcoming T.V. series about hackers called Mr. Robot. Fallon first talked with Slater about Slater’s hosting of Saturday Night Live, and he told Slater that he loved the skits that he had been in. Fallon brought up that Slater recently got married.

Slater said that his wedding ring was engraved with the phrase “This Too Shall Pass.” Fallon asked him about his gift for this wife, a stuffed raccoon. His wife had wanted a live one, so the gift did not really go over very well.

Fallon then talked with Slater about his upcoming T.V. series, Mr. Robot, about computer hackers. Slater said that it had done well at the Tribeca Film Festival. Then, the Tonight Show went to another break. 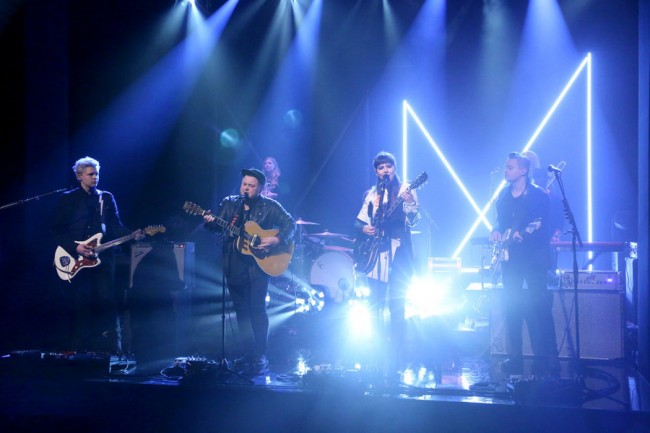 When the Tonight Show came back on, Fallon said that Dave Spade will be on the show tomorrow night, talking about his upcoming movie, Joe Dirt 2. Then, Fallon introduced the Icelandic group Of Monsters and Men, singing Crystals from their newest album, Beneath the Skin. It was an uber cool song. Fallon said, after the song was over, that the album is out now.

The Tonight Show was terrific this Wednesday night, with Jimmy Fallon’s two main guests being Whoopi Goldberg, who talked about her new line of socks among other topics; and his second guest, actor Christian Slater, who talked about having hosted Saturday Night Live and also about his upcoming T.V. series, Mr. Robot. Of Monsters and Men closed out the Tonight Show with an incredible song off of their latest album, Crystals.