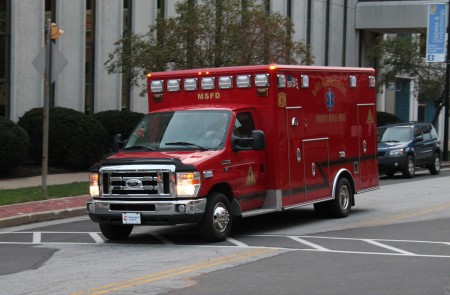 Chardon Police in Ohio have released a statement explaining that a seven-month-old child is currently in serious condition after she was caught in the middle of dog fight and was mauled. The two dogs involved in the tragic incident are said to be in quarantine at the Geauga County pound.

According to Police Chief Scott Niehus, the seven-month-old was sitting on the living room floor of her 23-year-old mother’s house around 8:30 p.m. Monday evening when the two dogs, whose breeds are unknown, began to fight. At one point during the skirmish, the little girl became entangled in the brawl. The animals bit and mauled her head and face before the mother’s 22-year-old boyfriend pulled them off.

A passerby contacted emergency responders when the mother ran screaming out of the house. The caller, whose name is not known, told the dispatcher the child was bleeding. The girl was said by Niehus to be in serious condition at a children’s hospital.

Niehus state one dog is owned by the mother and one by the boyfriend. He also said the dogs have been in contact with each other for over a year. “They’ve never been violent with one another, other than minor roughhousing,” he said.

Last month, a neighbor filed a complaint about the dog’s behavior, stating it was running loose and without its chain attached, according to the police chief. Though, it is currently unclear if that dog was involved in the incident.