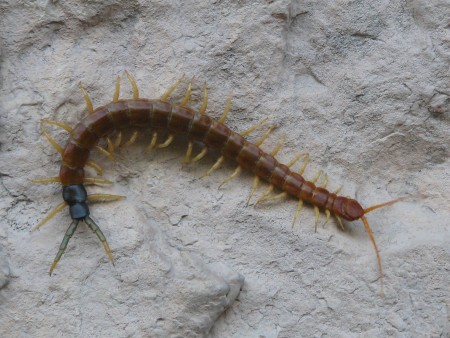 In Saline County, Arkansas, a teen experiencing a bad earache on Tuesday morning pulled a live 4 inch long centipede from his ear. Grant Botti, 14, felt something moving around inside his ear canal. Much to the teen’s surprise and shock, when he investigated and pulled out what was causing his earache by the creature’s tail end, he found that it was a centipede that was 10 centimeters or roughly 4 inches long, and it was still very much alive. The centipede’s invasion of Botti’s ear canal made news on social media sites around the world.

According to a report by KATV in Arkansas, Botti’s mom, Angela, did what any good mother would do, placing the centipede that was trying to make her son’s ear its new home into a plastic bag and then getting her son to a the emergency room of a nearby hospital, Saline Memorial, as quickly as possible to have doctors check him out. The doctors at Saline Memorial who examined Botti’s ear had seen cases where some strange things have been found inside of peoples’ ears, but they had never heard of a live centipede taking refuge inside of someone’s ear before.

Other than Botti’s eardrum having some abrasions, the doctors did not detect that the teen had suffered any other damage to his physical health, though some species of the creatures have a venomous bite that can be lethal to humans. Botti was treated and released with bandages covering the ear that the centipede had been yanked from by the teen.

Botti has stated that he is not positive exactly where he was when the centipede made its way into his ear. He did mention that he had been swimming lately, so he could have been just in the wrong place at the wrong time. Botti is expected to make a full recovery, though his ear was in pain even after he managed to remove the wriggling creature. The centipede’s fate has not been mentioned in any reports so far.

Despite the prefix “centi-” literally meaning “one hundred,” there have not been any of the multi-legged creatures discovered that have exactly 100 pairs of legs. They can have anywhere from 20 to more than 300 pairs of legs. However many pairs of legs the one had that Botti removed from his ear, finding anything alive there had to have been disconcerting for the teen, to put it mildly.

Centipedes are a type of creature that are called “arthropods.” Arthropods are invertebrates with exoskeletons, a segmented body, and jointed legs. All insects are arthropods, as are all arachnids, or spiders. Also, crustaceans like crabs and lobsters are arthropods.

Centipedes are usually brown or shades of dark red and they have been discovered in many diverse regions around the world. They have been found in deserts as well as in the depths of cave systems. The creatures often like to seek out moist environments, like underneath stumps or rocks in one’s backyard. The smallest species is only around one-eighth of an inch long, while the largest can get to be 12 inches in length. Some do not have eyes, but they have “ocelli,” which can group together and act as if they were compound eyes.

The news that an Arkansas teen pulled a live 4 inch long centipede from his ear on Tuesday morning attracted the attention of readers around the world. It is not the sort of experience that people want to have happen to them, but it makes for interesting and compelling news when it happens to someone else. Fortunately, the teen who had his ear invaded is doing well, and the offending arthropod did not do any permanent damage.